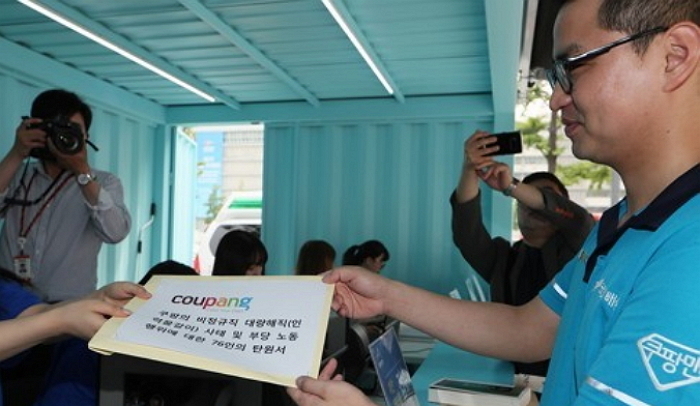 Some employees of Coupang filed a petition with Cheong Wa Dae, claiming that Coupang canceled the contracts of some 216 delivery personnel without reasonable cause. (image: Yonhap)

On Tuesday, some 75 former and current deliverymen, dubbed “Coupang Man,” filed a petition with the presidential office, claiming that Coupang canceled the contracts of some 216 delivery personnel between February and April without reasonable cause.

They also accused the company of cutting wages and refusing to give them regular positions after a certain period of time as promised.

“Coupang’s been coercing delivery staff into quitting jobs through reprimands and lower pay. It fired one top-performing worker without any notice,” Kang Byung-joon, a Coupang Man representing the petitioners told media earlier.

The Coupang Man system refers to customized shipping created by the e-commerce company. It is designed to ensure 24-hour shipments of ordered goods to front doors. Coupang trucks pick up packed items from the nearest warehouse and deliver as many as 150-200 boxes a day.

The Coupang Man is billed as a symbol of growth and innovation by the 7-year-old startup founded by Kim Bom, a Harvard Business School graduate. Kim, who’s often been described by local media as the Jeff Bezos of South Korea for his business model resembling Amazon’s, took the industry by storm when he unveiled the delivery network in 2014.

In a 2015 press conference, Kim confidently said the company will increase the Coupang men to 15,000 by 2017. According to the petitioners, there are some 2,237 delivery people currently hired by the company after the layoff. Coupang has never released an official figure related to the Coupang men.

The dispute lies in a cut in the new incentives system that took effect from April. Under the new reward system, the delivery staff needs to abide by tighter rules to get the monthly incentive, which the petitioners claim was adopted without workers’ consent.

Early this month, three Coupang deliverymen lodged a complaint with a regional district office of the labor ministry against Kim for violating existing laws, under which a business must turn temporary workers into regular positions after a two-year contract.

But there are no provisions for full-time hiring of those who have worked less than two years. A Coupang Man is currently hired on a six-month contract that is subject to renewal based on performance.

Due to the staff shortage, they face a daily workload of over 250 parcels these days, the petitioners argued, while also facing the burden of the insecurity about their jobs.

Coupang has denied the accusations, saying that the new incentive system incurs a difference in rewards, not a wage cut. It stressed that no contract was terminated in advance, nor is it renewed for underperforming staff.

The company said it maintains a steady rate for turning temporary Coupang men into full time employees and their average wage has been marked up, without giving details. A spokesperson for Coupang was not immediately reached for comment.

Industry watchers raise concerns that Coupang may face further backlash that could undermine its prospects, as new President Moon Jae-in is gearing up for a strong reform drive to tackle unemployment, with a focus on switching non-regular jobs to full time posts.

Putting the politics aside, the Coupang Man issue still leaves the e-commerce firm with the task of regaining trust from consumers as its credibility has been questioned for alleged unfair practices, watchers said.

“It’s certainly a blow for a company that boasted about having raised US$1 billion from Softbank. But there’s always been doubt over how long Coupang Man would last. It’s like pouring every penny you earn into shipping costs,” an industry official said, asking not to be named.

Coupang suffered an operating loss of 560 billion won (US$499 million) in 2016, running in the red for a fourth consecutive year. Its revenue jumped 64 percent on-year to 1.9 trillion won, far trumping rivals in terms of sales.