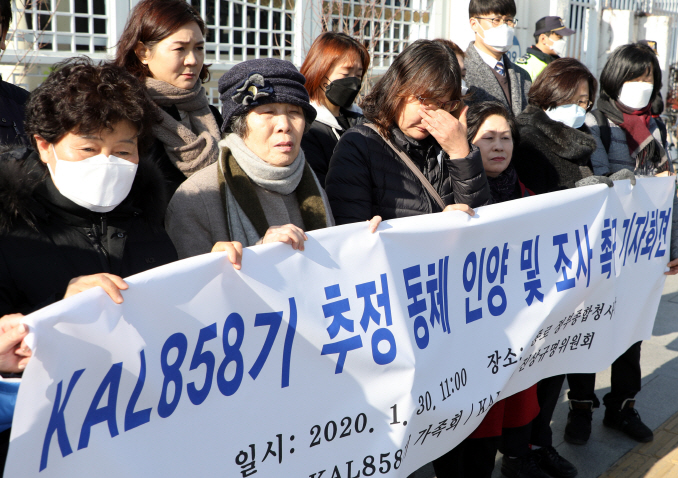 Bereaved families of the victims of KAL Flight 858 hold a news conference in front of the government complex in Seoul on Jan. 30, 2020, to demand the doomed jet’s fuselage be salvaged from waters off Myanmar. (Yonhap)

SEOUL, Jan. 30 (Korea Bizwire) — Bereaved families of the victims of a Korean Air jet explosion in 1987 on Thursday urged the South Korean government to launch a full investigation into the case, following reports that a fuselage presumptively linked to the 1987 crash was recently found in the sea off Myanmar.

Korean Air Lines (KAL) Flight 858 carrying 104 passengers and 11 crew members on route from Baghdad, Iraq, to Seoul exploded in midair and disappeared over the Indian Ocean on Nov. 29, 1987.

At that time, investigative authorities concluded that the explosion was caused by a bomb planted by North Korean agents, while the Seoul government has failed to find any wreckage or belongings.

A local media report published about a week ago claimed that wreckage from the doomed KAL Flight 858 may have been found in the Andaman Sea near Myanmar, noting a Korean TV crew spotted a wing-shaped object and part of a fuselage.

A group of bereaved families of the KAL 858 victims held a news conference in front of the main government building and demanded that the fuselage believed to belong to the crashed KAL jet be immediately salvaged from the sea off Myanmar.

“The truth and all the facts of the crash lie with the KAL 858 jet itself. A salvage operation and relevant investigation is an obligation for the Korean government to fulfill for the bereaved families who have yet to receive a single article from the victims for the past 32 years,” the group said in the news conference.

It regretted that the government had not conducted any faithful search operation after swiftly concluding the explosion was carried out by North Korean agents.

It plans to submit a petition to the presidential office Cheong Wa Dae.

Both an initial government investigation in 1987 and a reexamination during the Roh Moo-hyun government concluded that the explosion was masterminded by North Korean female agent Kim Hyon-hui.

But the bereaved families have steadily called for the truth, noting there was no evidence except for Kim’s testimony.