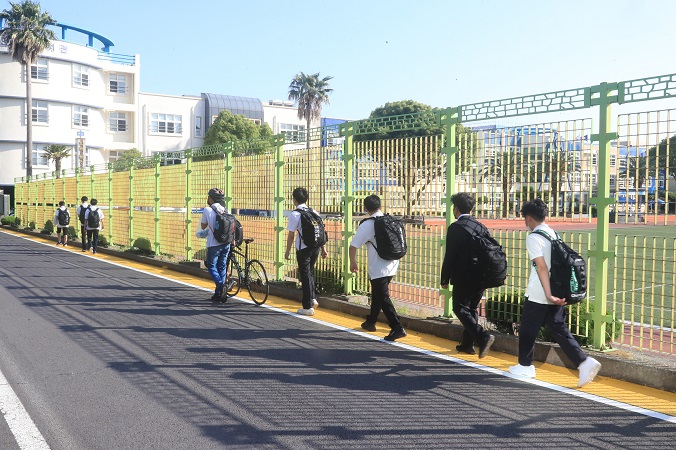 In this file photo, taken on June 8, 2020, students keep a distance from one another upon arriving at Jeil Middle School on South Korea’s southern island of Jeju as the country implemented its fourth phase of school reopening for middle school first graders and elementary school fifth and sixth graders. (Yonhap)

SEOUL, Aug. 16 (Korea Bizwire) — The government’s restrictions on classroom capacity will be strengthened in the metropolitan area starting next week following a surge in the number of new coronavirus cases in the region, the education ministry said Sunday.

From Tuesday to Sept. 11, the number of students at kindergartens and elementary and middle schools should be kept under one-third of the total for schools in Seoul, Incheon and Gyeonggi Province, heightened from an earlier guideline that limited them to a two-thirds level, according to the Ministry of Education.

The decision came as South Korea has seen a spike in the number of COVID-19 cases related to churches in the greater Seoul area, prompting the government to raise the social distancing guidelines in the region by one notch to Level 2 in the three-tier system for two weeks starting Sunday.

The ministry said the plan to hold the College Scholastic Ability Test (CSAT), the country’s biggest academic event of the year, in early December remains unchanged for now.

“We will prepare to hold the exam on Dec. 3 as planned, making thorough preparations to make sure it can be held safely,” Education Minister Yoo Eun-hae said during a briefing.