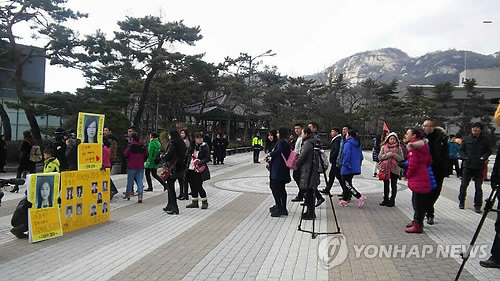 SEOUL, Feb. 26 (Korea Bizwire) — Families of those missing in last year’s Sewol ferry disaster began a one-person relay protest in Seoul on Thursday, calling for a swift and full salvage of the sunken ship.

Parents of Huh Da-yun and Cho Eun-hwa, both teenage girls who went missing in the ferry sinking, were standing alone in turn on a road near the presidential office of Cheong Wa Dae, holding pickets carrying photos of the nine people remaining unaccounted for after the ferry capsized off the southwest coast on April 16.

The pickets also had phrases such as “Da-yun, your mom and daddy madly miss you” and “Eun-hwa, Mom and Dad love you” below the photos of their children.

The sinking killed more than 300 passengers, mostly students of the same high school on a field trip to the southern resort island of Jeju.

“Please remember that there are families of the nine missing people,” Cho’s father told reporters. “We’re here purely as parents of the girls with no political motives and will continue this rally till a salvage is made.”

In early November, the government terminated the search for those missing from one of the nation’s worst maritime disasters, citing safety risks for divers.