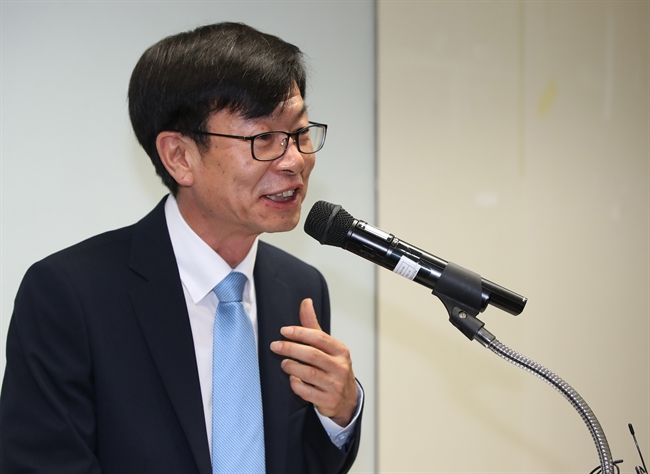 “I will assess issues related to the four major groups in a more thorough manner when the Fair Trade Commission implements laws,” Kim Sang-jo, an economics professor from Seoul’s Hansung University, said in a news conference.

The four are the Samsung, Hyundai Motor, SK and LG groups that account for two-thirds of assets held by South Korea’s top 30 conglomerates, a clear sign of concentration of wealth under the control of the giants.

Kim also warned family-run conglomerates, known as chaebol in South Korea, against “breaking laws” and asked them to take into account market expectations on business practices and corporate governance.’

The comments came a day after he was nominated by liberal President Moon Jae-in as the chairman of the Fair Trade Commission, which handles price rigging and other unfair business practices.

The vocal critic of chaebol said reform is not meant to undermine or dismantle conglomerates, but to induce them to become a valuable asset to South Korea’s economy.

“What matters is to create jobs by reestablishing fair competition in the market,” Kim said.

Chaebol have played a key role in transforming South Korea into an economic powerhouse from the ashes of the 1950-53 Korean War.

Still, South Korea has long been trying to rein in the economic dominance of chaebol and to level the playing field for smaller firms in a country that has been effectively dominated by these companies for decades.

Of the four, Samsung Group is the largest, and its businesses include Samsung Electronics Co., the world’s top maker of smartphones.

Asked about ending cross-shareholding arrangements, Kim said the issue is not a top priority as the practice has been cut dramatically in recent years.

Five years ago, 14 groups had a whopping 98,000 cross-shareholding ties for their affiliates, but last year the corresponding numbers fell to about 90 being used by eight groups.

Cross-shareholding has long been a widespread practice in South Korea, in which a handful of chaebol owner’s family members control the entire business group with small stakes.

Hyundai Motor Group is the only remaining chaebol that has yet to resolve its cross-shareholding structure among group affiliates.