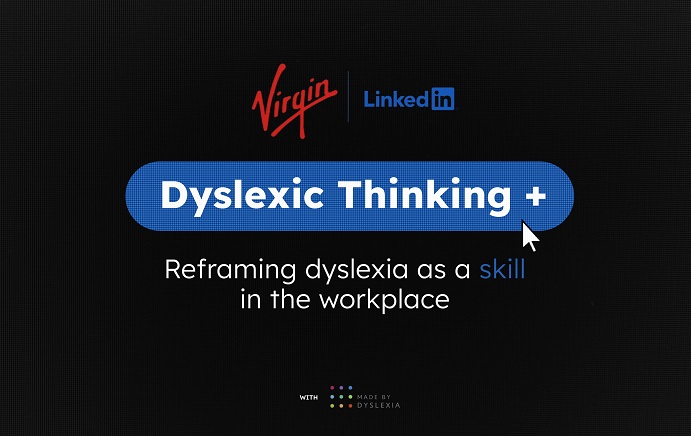 “Dyslexic Thinking” by FCB Inferno & Virgin Group, in collaboration with LinkedIn and Made By Dyslexia

CANNES, France, June 27 (Korea Bizwire) — FCB Inferno London and Virgin Group, in collaboration with LinkedIn and Made By Dyslexia, have been awarded a Titanium Lion for their “Dyslexic Thinking” campaign at the Cannes Lions International Festival of Creativity — one of only six awarded in the category, FCB Inferno’s first-ever Titanium Lion and the network’s fourth in three consecutive years.

The Titanium category, the Festival’s most prized and hardest category to win, celebrates breakthrough ideas that are provocative and that point to a new direction in the industry. The accolade follows the campaign’s success in other categories this week: two Silvers — one in PR and one in Social & Influencer — and three Bronze Lions: in Brand Experience & Activation, Creative Strategy and PR.

The campaign, created by FCB Inferno London, got “Dyslexic Thinking” added as a skill on LinkedIn, the world’s largest professional network, offering its 810+ million members globally the option to add “Dyslexic Thinking” to their profile. Thanks to the initiative, Dictionary.com is also adding “Dyslexic Thinking” as an official term, noting its “strengths in creative, problem-solving and communication skills.” Most importantly, it created a seismic shift by making neurodiversity an asset that companies around the world seek out to better their business.

The agency’s success at this year’s Festival has helped make FCB Inferno the third most-awarded agency in the UK in 2022 — the third consecutive year FCB Inferno has earned top-three UK creative agency credit at the Festival.

Tamara Pickett, Virgin Group communications and external relations director, said: “As a company founded by one of the world’s most iconic entrepreneurs whose success has been fuelled by dyslexic thinking, Virgin was proud to partner on this important work. Sir Richard Branson now lists ‘Dyslexic Thinking’ as a skill on his LinkedIn profile, and we are thrilled to see it be honoured in such a meaningful way. We hope this is just the beginning of companies across the world helping to give a voice to the many diverse groups and attributes that give businesses a clear advantage.”

Kate Griggs, founder and CEO of Made By Dyslexia, said: “At Made By Dyslexia, our mission is to empower dyslexic thinking in every school and every workplace. By adding Dyslexic Thinking as a skill on LinkedIn, it immediately redefines it as the valuable asset that it is. I’m so proud and pleased that this campaign has been recognised for the systemic change that it will create.”

Owen Lee, chief creative officer at FCB Inferno London, said: “This campaign has been incredibly special for all of us that have had the honour of helping bring it to life and a real testament to the kind of ‘Never Finished’ ideas we aim to create. The real reward and credit though goes to all the people out there with dyslexia who have spent much of their lives trying to hide their neurodiversity.”

Katy Wright, managing director of FCB Inferno, said: “I have dyslexia and as a child I felt it was something I had to hide. But growing up I saw the positives and the ways it helped me to approach problem-solving differently. Dyslexia is not a superpower and it’s certainly not a disorder, it’s simply a different and creative way of thinking and it’s been so important for us to finally get that fact recognised. Winning this award means so much on a personal level. I hope our campaign inspires more employers to do everything possible to encourage all forms of diversity in the workplace.”

Danilo Boer, global creative partner at FCB Global, said: “Working with Virgin and LinkedIn on ‘Dyslexic Thinking’ was truly inspiring. This idea not only fundamentally changed the perception of the word ‘dyslexia’ and created an entirely new term in the dictionary, but it also started a seismic shift in making neurodiversity an asset that companies around the world need now more than ever.”

The agency’s success is another major win in what has been a big year for FCB Inferno, which added new leaders to its C-suite in 2021. Under this team, FCB Inferno launched new creative data practice FCB/SIX and has expanded its client base with new wins, including Unite Students, as well as organic growth from existing clients such as Kimberly-Clark and the UK Government. It also moved into new offices at the Old Bailey earlier this year, becoming the only creative agency embedded there with IPG’s media, data and audience offerings.

About FCB Inferno
FCB Inferno, based in London, is one of the world’s leading creative agencies and works with a diverse mix of local and global clients. The agency creates ideas that drive business today and build brands of tomorrow — ideas that endure and are Never Finished. Its work is highly commercial and purpose-driven for some of the world’s most iconic brands, including the acclaimed “This Girl Can” campaign for Sport England.

FCB Inferno’s creativity and effectiveness have been recognised at numerous global award shows for solving clients’ business problems in innovative ways. This includes multiple Grands Prix at Cannes, D&AD White and Yellow Pencils and even a BAFTA nomination.

The agency is part of the FCB Network with over 8,000 employees across 80 countries. FCB was named Global Agency Network of the Year by Adweek 2020 and Network of the Year at the Cannes International Festival of Creativity for 2020/2021. FCB was also awarded the inaugural One Show Fusion Pencil for diversity and inclusion, the Good Report’s #1 Campaign and Network, and a Grand Prix in e-commerce at Cannes.

About Virgin Group
The Virgin Group is a leading international investment group and one of the world’s most recognised and respected brands. Created in 1970 with the birth of Virgin Records, the Virgin Group has gone on to invest in, incubate, and grow a number of successful businesses in the private and public markets. The Virgin Group has expanded into many sectors since its inception, driven by Sir Richard’s ambition to create the world’s most irresistible brand. These sectors include travel & leisure, financial services, health & wellness, technology & internet-enabled, music & entertainment, media & mobile, space, and renewable energy. Find out more at virgin.com

About Made By Dyslexia
We’re a global charity, led by successful dyslexics. We’ve built the world’s largest community of dyslexic people and our allies. Our purpose is to help the world to understand, value and support dyslexia.

We believe in the game-changing power of Dyslexic Thinking. After all, everything from the light bulb to the iPhone, the aeroplane to the motor car, was invented by a dyslexic mind. And our skills are vital in shaping the future too.

Our mission is to train every teacher and workplace to spot, support and empower every dyslexic mind. This mission is aligned with the UN Sustainable Development Goals and we aim to achieve it by 2030.

A photo accompanying this announcement is available at https://www.globenewswire.com/NewsRoom/AttachmentNg/a2f9479a-fcf2-4e5d-8bc9-155f36b35ac0