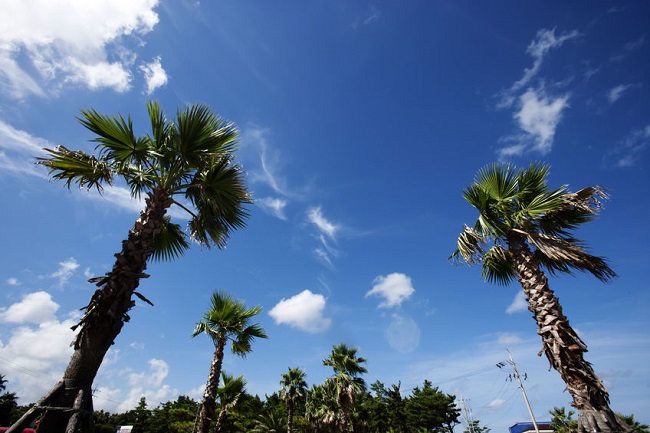 JEJU, Aug. 6 (Korea Bizwire) — Officials from the city of Jeju said on August 3 that during the months of August and September, measures would be taken to replace tropical trees adjacent to electric wires in order to prevent electrical safety accidents such as power outages or fires.

The city signed an agreement with the KEPCO (Korean Electric Power Corporation) Head Office in Jeju on April 17 for a joint initiative to transplant tropical trees, as a means to improve urban views and to prevent power outages.

The project is expected to cost 108 million won, with Jeju on the hook for 61 million won and KEPCO covering the remaining 47 million won, and will involve the removal of a total of 28 Washington palm trees along Garyeong street, which will be replaced with round-leaf hollies, evergreen broad-leaved trees.

In the past five years, eight power outages caused by palm trees have taken place in the city of Jeju. The trees around Garyeong street, many of which are above 10 meters high, have often become entangled with 25 kV volt high tension wires, posing a significant safety risk.

“If the project to transplant the 38 palm trees along Garyeong street turns out to be successful, an additional 230 palm trees located along Seungcheon-ro and Goma-ro will be transplanted in sequence,” said Moon Seong-ho, a city official in charge of creating green space. “Safe electric power supply and the provision of pleasant pedestrian environments are the project goals.”
For the time being in the city of Jeju, there are 1,325 palm trees among a total of 39,790 street trees.