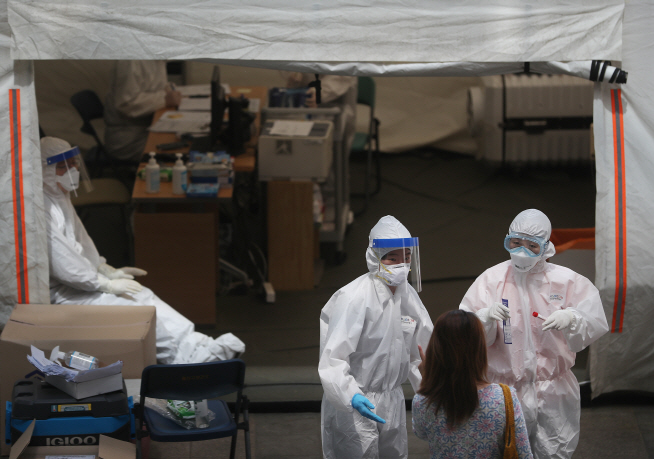 Medical workers carry out COVID-19 tests on visitors at a makeshift clinic in Seoul on May 18, 2020. (Yonhap)

SEOUL, May 20 (Korea Bizwire) — The much-hyped mass outbreak of the coronavirus that started at an Itaewon club might have been forecast as a typhoon but has ended up more like a breeze.

The apparent success in avoiding a serious spike in infections is the latest accomplishment confirming the excellence of “K-quarantine” that is attracting attention around the world, and the high civic awareness of Koreans with a proper sense of solidarity is taking off.

For some time, concerns over massive proliferation seemed to emerge as a reality.

Since the onset of the Itaewon club infection cluster, the number of patients linked to community spread has remained in double digits for a week, and peaked at 29 on May 11.

The epidemiological investigation was also expected to be difficult, largely because there were many clubbers and sexual minorities who were highly likely to avoid inspection for fear of hatred and stigmatization.

In conclusion, such concerns were groundless.

Even under the threat of mass infection, “K-quarantine” – mass inspection, rapid disclosure of information, excellent medical system and dedication of medical staff – proved its worth once again.

Above all, citizens’ voluntary cooperation with authorities investigating recent cases is regarded as the top contributor to the preventing the further spread of the virus.

Thankfully, the cumulative number of tests related to the Itaewon club jumped to 65,000 as of Monday. This is a scale that is difficult to achieve without high awareness and voluntary cooperation when it comes to testing.

Policy decisions that eased the burden of testing by allowing those tested to remain anonymous also played a critical role.

The number of confirmed cases in the region declined from 22 on Wednesday to six on Sunday as a result of the mass testing.

Health and Welfare Minister Park Neung-hoo said in a briefing Sunday that if the current trend is maintained, the number of new confirmed cases will stabilize within the scope of the quarantine network. 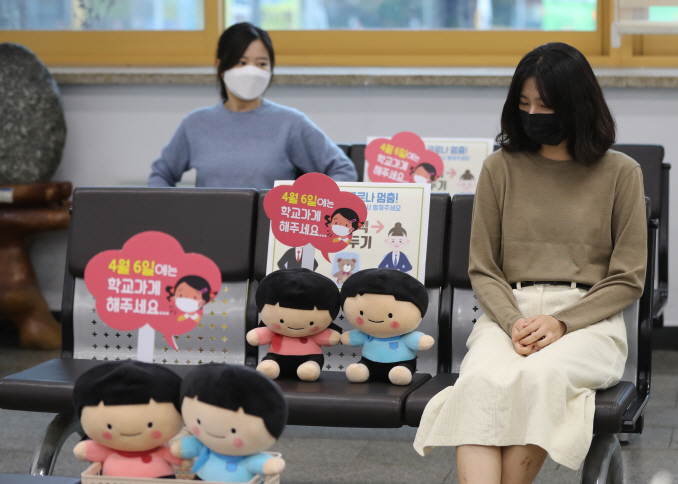 Dolls are placed on seats to promote social distancing at a community office in Gwangju on March 26, 2020. (Yonhap)

South Korean citizens are very cooperative in wearing masks, which play a crucial role in preventing the spread of COVID-19. Among citizens out in public, those without a mask are few and far between.

Citizens are also following the guidelines put forward by the quarantine authorities.

According to an online survey of 1,000 adults nationwide conducted by the Korea Centers for Disease Control and Prevention, 97 percent said they were following proper cough etiquette.

Cough etiquette refers to covering one’s mouth and nose with a sleeve, tissue, or handkerchief, and not a hand, when coughing.

Since the outbreak of Middle East Respiratory Syndrome (MERS) in 2015, cough etiquette has been recommended as a key quarantine rule, and has taken root as a norm in Korea after COVID-19.

On the other hand, only 4 percent of the respondents said they did not abide by the “refrain from going out” measure recommended by the quarantine authorities.

Some 95 percent of the respondents said they would refrain from entering multiple facilities such as libraries and cafes, and 92.9 percent said they would not attend meetings and religious events.

“Considering my health, and the health of my family, and my neighbors, it is hard to go out without a mask,” an office worker said.