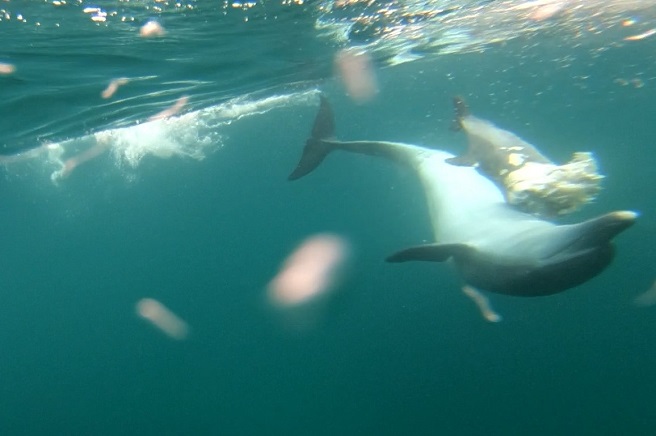 A dolphin tries to push the body of her dead calf up to the surface under seas off South Korea’s southern Jeju Island on June 11, 2020, in this photo released by the National Institute of Fisheries Science.

BUSAN, June 29 (Korea Bizwire) — A female dolphin was found in the waters off Jeju Island carrying a deceased calf.

The National Institute of Fisheries Science (NIFS) Cetacean Research Institute discovered a female dolphin attempting to take a deceased calf to the water’s surface on June 11, during observation of Indo-Pacific bottlenose dolphins near the shores of Gujwa-eup, Jeju City.

The calf, which was suspected to have died immediately after birth, was almost unrecognizable due to the decay throughout its entire body except for the tail fin and the caudal peduncle.

The mother dolphin was found to repeat the process of coming back to carry the carcass of the dead calf if it detached from her.

“Considering the size of the carcass, it seems like the female dolphin had been doing this for more than two weeks,” said Dr. Kim Hyun-woo from the NIFS.

Similar cases have been reported sporadically worldwide, the institute explained, including two cases each in 2017 and 2018 among pods of Indo-Pacific bottlenose dolphins near Jeju Island.

“Scientists believe that mother dolphin’s attachment to the deceased calf is a form of defense,” said a NIFS source.

“We can now easily find dolphins near the island. If you spot them, stay away from their course and wait until the entire pod passes the area.”