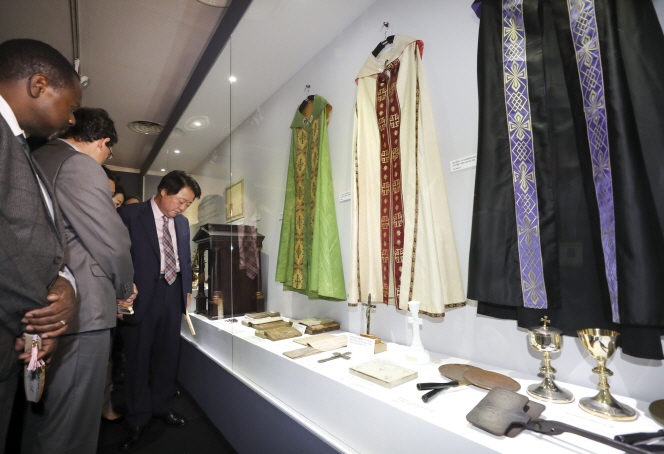 Participants visit an exhibition during the opening ceremony of the 2018 Jikji Korea International Festival at the Arts Hall in the central South Korean city of Cheongju on Oct. 1, 2018. (image: Yonhap)

CHEONGJU, Oct. 2 (Korea Bizwire) — An elaborate ceremony that began with the boom of a bell has kicked off celebrations for the return of Jikji Korea, an annual festival on the world’s oldest extant book printed with movable metal type, to the central South Korean city of Cheongju.

The curtain was raised on the 2018 Jikji Korea International Festival on Monday. Culture Minister Do Jonhg-hwan, North Chungcheong Gov. Lee Si-jong, the festival’s chief organizer and Cheongju Mayor Han Beum-deuk and UNESCO’s Assistant Director-General for Communication and Information Moez Chakchouk were among the guests who jointly tolled the Millennium Bell at the start of the opening ceremony in the Cheongju Arts Hall.

During the opening ceremony attended by 1,000 people, the mayor said the international festival is an event to help Korean people take pride in being descendants of a civilized country that introduced movable metal type printing technology to mankind for the first time. He vowed to establish an international network to discuss ways to preserve documentary heritage and improve access to it.

Printed at the city’s Heungdeok Temple in 1377, “Jikji” is the abbreviated title of “Jikjisimcheyojeol,” a book on the Zen teachings of great Buddhist priests. In that year, two disciples of Ven. Baegun completed the publication of the book written by him using movable metal type.

UNESCO confirmed “Jikji” as the world’s oldest metal-printed book in 2001 and included it in the UNESCO Memory of the World Programme that year.

“Throughout the festival, we will convey to the world a message about the spirit and the wisdom of ‘Jikji’ that has been highlighted as the first book ever printed with movable metal type,” Han said.

At the opening ceremony, a Malian nongovernmental organization, SAVAMA DCI, received the seventh edition of the UNESCO/Jikji Prize for Memory of the World, which is awarded biennially by Cheongju and administered by UNESCO’s Communication and Information Sector.

Abdel Kader Haidara, a representative from the NGO, said “the award recognizes and rewards its efforts to protect the collective memory of Africa and the soul of Mali,” adding that its purpose is to encourage all institutions that work to preserve and share cultural heritage.

The opening ceremony was followed by a performance of the city’s dance troupe, fireworks and a concert featuring rock singers Jaurim and Yoon Do-hyun.

During the 21-day festival, to be held around the main venue of the Cheongju Arts Hall, organizers have drawn up an exhibition, a series of activities, lectures, international academic conferences and programs in which visitors are invited to take part under the theme of “A Walk Through Jikji Woods.”

They have also replicated a marketplace from the 918-1392 dynasty where people visiting the festival can experience traditional culture and a variety of Korean foods.

An official at the organizing committee said visitors will also have daily opportunities to enjoy concerts with various themes and street art that they have not seen elsewhere during the festival’s run.

Cheongju, home to the world’s oldest movable metal type, has held the Jikji Festival since 2003 as part of efforts to develop the city into a “hub of printing culture” like Germany’s Mainz and to further promote metal-type text around the world.