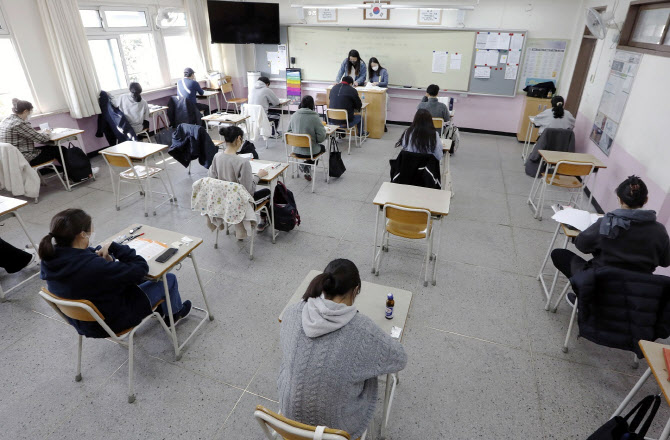 Applicants sit for a state exam to recruit public servants at a test site in southern Seoul on April 2, 2022, in this photo provided by the Ministry of Personnel Management.

According to a thesis published by Park Sung-jae, a senior fellow at the Korea Labor Institute, the number of Koreans preparing for state exams to recruit public servants shot up to 279,000 last year from 218,000 in 2015, accounting for 33.7 percent of the total number of those preparing for job exams.

Based on a sample of 3,135 university graduates in the youth panel of the Korea Employment Information Service, the study showed that 643 prepared for civil service exams and only 103 passed the exams.

The share of those preparing for civil service exams is high among those who graduate from universities in Jeolla and Gyeongsang provinces, where employment opportunities are typically worse than in metropolitan areas.

The study also found that failure on the exam for public servants has a significant adverse impact on the quality of future employment.

“With a labor market structure in which job supply lags behind demand, vacancies are filled starting with good jobs. Entry into the labor market after preparing for civil service examinations can increase the possibility of getting a low-quality job,” Park said.