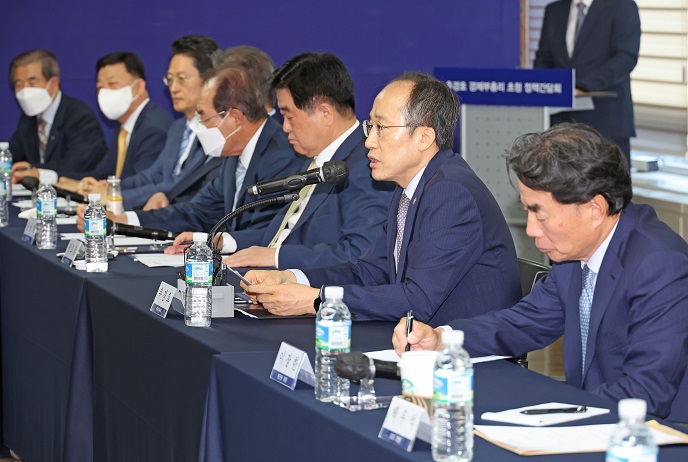 Finance Minister Choo Kyung-ho (2nd from R) speaks during a meeting with members of the Korea Enterprises Federation in Seoul on June 28, 2022. (Pool photo) (Yonhap)

Choo made the request during a meeting with members of the Korea Enterprises Federation (KEF), including Sohn Kyung-shik, federation chief and CJ Group chairman, and Rhee In-yong, president of Samsung Electronics Co.

“We’re concerned that some IT companies and large conglomerates have recently jacked up wages, and such a trend has shown signs of spreading to other industries and companies,” Cho said.

“Excessive wage increases not only worsen the inflation situation but also expand the wage gap between large companies and small to midsized firms, which make workers at SMEs feel a sense of deprivation,” he added.

How to tame surging inflation has been South Korea’s No. 1 policy priority. The country’s consumer prices jumped 5.4 percent on-year in May, the fastest rise in almost 14 years.

“The government has gone all out to stabilize prices. But the government’s efforts can never be enough,” he said, calling on companies to improve productivity and cut costs in order to help keep inflation in check.

Sohn said the federation has advised member companies to use their financial resources for employment and better working conditions for smaller affiliates and subcontractors, noting that firms are well aware of the problems with high wage increases and will make active efforts to resolve such issues.

Choo also asked companies to create more jobs through investment, and vowed to ease regulations and reform the taxation system and the labor market to support corporate activities. 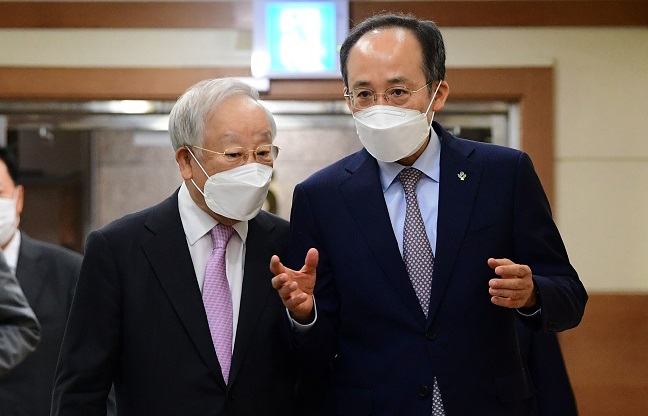 Finance Minister Choo Kyung-ho (R), who doubles as the deputy prime minister for economic affairs, talks with Sohn Kyung-shik, head of the Korea Employers Federation (KEF), while walking to a KEF meeting room in Seoul on June 28, 2022. (Pool photo) (Yonhap)

Samsung said it will invest 450 trillion won (US$350.16 billion) in semiconductors and other key sectors by 2026, and top carmaker Hyundai Motor Co. pledged 63 trillion won of investment by 2025 to strengthen its future mobility businesses.

In response, Sohn called on the government to push for its strong deregulation drive, inheritance tax cuts and other reform measures.

The federation plans to submit detailed proposals on tax revisions to the government next month, the chief added.

The Yoon Suk-yeol government has vowed to pursue economic policies centered on private sector-led growth and deregulation in the face of multiple economic headwinds.