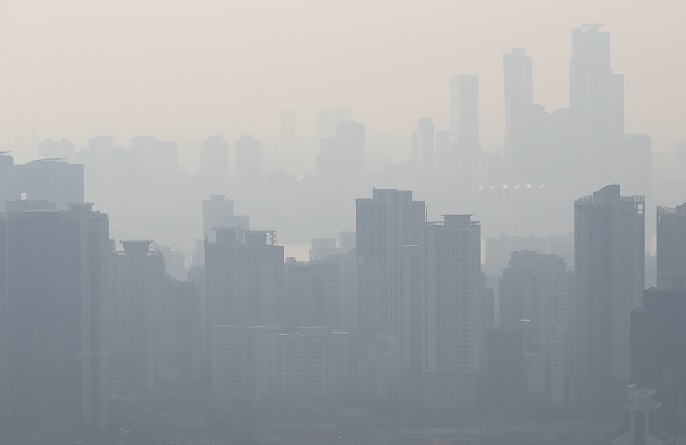 This file photo shows a housing neighborhood in Seoul blanketed with ultrafine dust on Nov. 26, 2020. (Yonhap)

Researchers from Konkuk University conducted a study of 5,717 male and female adults over 19 years of age to verify the correlation between their level of insulin resistance, which plays a key role in the generation of metabolic syndrome like diabetes, and the level of their exposure to polycyclic aromatic hydrocarbons (PAHs), a main component of fine dust.

The level of insulin resistance was evaluated by calculating the triglycerides (TG)/high-density lipoprotein (HDL) ratio.

The researchers found that there was a significant level of correlation between the density of 1-OHP in urine and the level of insulin resistance for both men and women.

For female participants, the level of insulin resistance increased in tandem with the increase in the density of 1-OHP in urine. Male participants showed a J-shaped pattern of increase.

The research team concluded that the exposure to PAHs can act like an estrogen, a female hormone, in the body, with the estrogen contributing to increasing the level of insulin resistance.