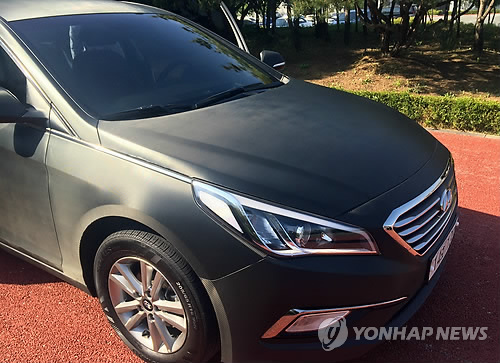 ENKorea announced that it produced three carbon fiber “C-cars,” which will be used as rental cars to promote the advantages of carbon fiber plates, which are 10 times harder than steel plates. (image: Yonhap)

ENKorea announced that it produced three carbon fiber “C-cars,” which will be used as rental cars to promote the advantages of carbon fiber plates, which are 10 times harder than steel plates. They also use less energy, thus reducing carbon emissions.

Currently, there are some luxury vehicles with aftermarket carbon fiber replacement parts. However, these are the first commercialized vehicles that ordinary people can use as rental cars. C-cars were named after the first letter of “carbon.”

The exterior of C-cars (excluding door parts) is made entirely of carbon fiber materials. By using carbon fiber plates, the weight of the bonnet, roof and trunk was reduced by one third compared to steel. Carbon fiber shows better mileage at 15.3km/l compared to 14.8km/l for steel, and its 0-100kmph acceleration has fallen to 7.1 seconds from 7.8.

However, production costs are a barrier that can impede widespread usage. It costs some 30 million won to make a carbon fiber LF Sonata. ENKorea will develop related technologies to reduce the production costs 50 to 60 percent.

Choi Jung-hwan, CEO of ENKorea, said, “C-cars are a meaningful step in the use of carbon fibers in common vehicles. In the past, carbon fiber plates were used in some luxury German vehicles as a car-makeover. We will concentrate on developing technology to reduce production costs.”