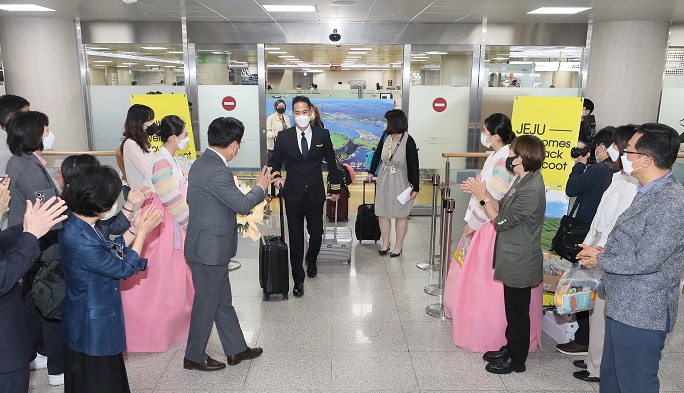 Jeju Island officials welcome international tourists at Jeju International Airport on June 15, 2022. They arrived on the island on Singaporean budget carrier Scoot’s aircraft as the company launched a direct flight between Singapore and Jeju. (Yonhap)

SEOUL, June 15 (Korea Bizwire) — The southern resort island of Jeju welcomed the first direct flight from Singapore on Wednesday as part of efforts to revive its pandemic-hit tourism industry.

Singaporean budget carrier Scoot’s Airbus A321neo aircraft arrived at Jeju International Airport early in the morning as the airline inaugurated its non-stop service between the island and Singapore.

The regular service will run three times a week on Wednesdays, Fridays and Sundays.

It is South Korea’s second direct flight service with the Southeast Asian country, after one linking the city-state and Incheon, west of Seoul, which is also operated by the low-cost subsidiary of Singapore Airlines.

Scoot’s flight TR812, nearly packed to capacity with 201 passengers, touched down on Jeju at 8:45 a.m. after a roughly six-hour journey from Singapore Changi Airport.

They were greeted by jubilant officials from the local government, the airport and tourism organizations. They received a safety travel kit and a bouquet of flowers and took photos under the welcome banner.

“I am very happy to be back to Jeju after two years. I visited last time in fall and was curious about what Jeju would be like in summer,” a 28-year-old Malaysian woman said.

Singaporean Ambassador to South Korea Eric Teo welcomed the launch of the flight service and expressed hope that it would help promote tourism and exchanges between Jeju and Singapore.

All the arrivals will take COVID-19 tests within three days of arrival and visit major tourist destinations of the island, Jeju officials said.

Among the passengers were tourism industry officials from Malaysia and marketing managers of global online travel agency Klook.com, they said.

Scoot had planned to launch the Jeju flight in 2020 but delayed the plan due to COVID-19. 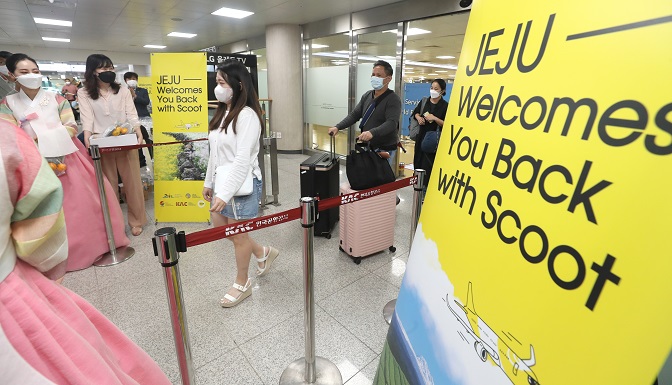 Jeju Island officials welcome international tourists at Jeju International Airport on June 15, 2022. They arrived on the island on Singaporean budget carrier Scoot’s aircraft as the company launched a direct flight between Singapore and Jeju. (Yonhap)

About 180 people visited the island on a flight from Bangkok on June 3. They were first foreign tourists to land on Jeju after international flights were suspended at the airport in April 2020.

The island also resumed this month its visa waiver program, which was halted on Feb. 4, 2020. It was introduced in 2002, allowing international travelers to stay for up to 30 days without a visa.

“Ahead of the summer vacation season, online searches for Scoot’s Jeju routes and hotel reservation websites have increased,” Kim Ae-sook, head of the tourism bureau of the provincial government, said.

“We hope the launch of the regular flight will serve as a catalyst to blow away the worries of the international tourism industry,” she added.