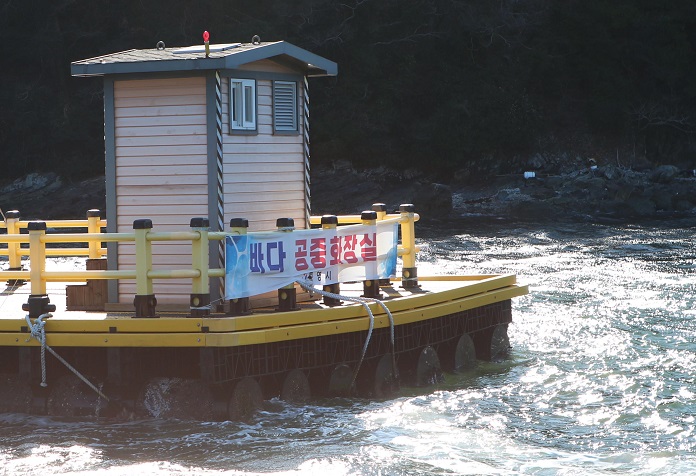 TONGYEONG, Jan. 18 (Korea Bizwire) — A series of pricy public restrooms are being built along the southern coast of South Korea, a boon for local fishermen.

Some 17 ‘Sea Restrooms’ have been set up along the coast of Namhae County and the city of Geoje, adding to 11 restrooms built in 2012.

The restrooms were set up after food poisoning bacteria, normally found in human excrement, were discovered at a local oyster farm, which effectively blocked local oysters from being exported.

In response, South Gyeongsang Province stepped up to try out an unprecedented attempt to prevent human excrement from reaching the ocean.

The Sea Restrooms come with a device that collects human excrement on top of a raft-shaped floating platform. At 8 meters in width and 10 meters in length, each restroom costs around 60 million won (US$50,370).

The composting toilets don’t use water at all.

“Since we can’t discard excrement in the sea, we use the restrooms quite frequently,” said Kang Yeon-woo, the 59-year-old owner of a local fish farm. “The restrooms are especially popular among female workers.”