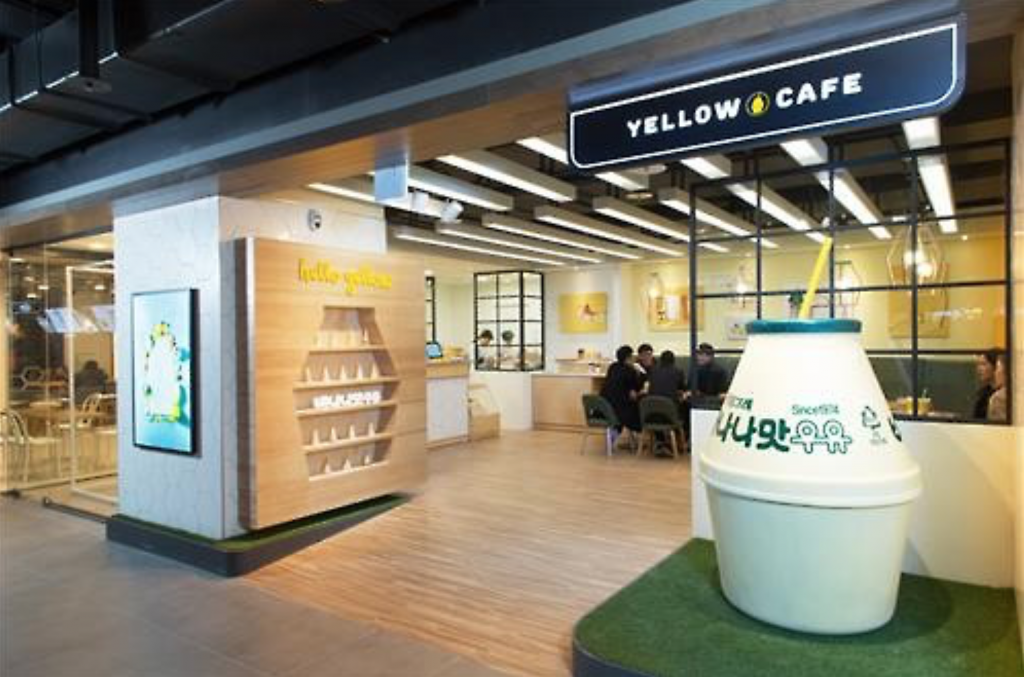 Binggrae in March gave its Banana-flavored Milk, a product that has survived for 40 years, a new twist in March by opening a cafe in downtown Seoul that sells beverages and ice cream based on the milk. Opened in collaboration with Hyundai Department Store that hosts the cafe at its downtown outlet, Yellow Cafe is making monthly sales of some 100 million won (US$85,178), company officials said.

Binggrae also worked with Olive Young, a health and beauty store chain, to sell body care products based on its milk brands. Last month, it opened a soft ice cream shop at a Lotte Department Store branch in southern Seoul.

Company insiders say the moves are market tests for Binggrae, which is interested in starting a restaurant business.

Orion, synonymous with its most popular snack Choco Pie, is operating a desert cafe, Lab O, in southern Seoul. As its name suggests, the store serves as the company’s research center for dessert products, getting consumer reactions to different flavors and foods tweaked from its mainstream brands.

Haitai Confectionery & Foods, which recently landed a smash hit with its honey-flavored potato chips, Honey Butter Chips, runs cafe Haitai Ro at two locations in Seoul. The stores sell desserts, as well as character figurines and stuffed animals that enjoy the company’s snacks. Officials at the firm say the cafes are more like “antennae shops” that catch consumers’ preferences.

Lotte Confectionery has Guylian Cafe at the Lotte Department Store’s Lotte World branch that sells desserts made with the Belgian chocolate. Lotte took over the brand in 2008. Lotte separately operates exhibition booths for its own products in southern Seoul.

Food companies likewise are working their way directly to consumers through restaurant-style shops.

SPC Samlip has adopted “grocerant” as its concept store, mixing a grocery store with a restaurant. Its Glucks Schwein, which sells premium processed meats, has German sausages and beer on its menu. The company’s noodle line Hi-myon, launched in 1974, is being marketed at its noodle specialty restaurant Hi-myon Udon. Company officials say they are planning to open 20 Glucks Schwein franchises by 2018 on top of 10 noodle restaurants by the end of next year.