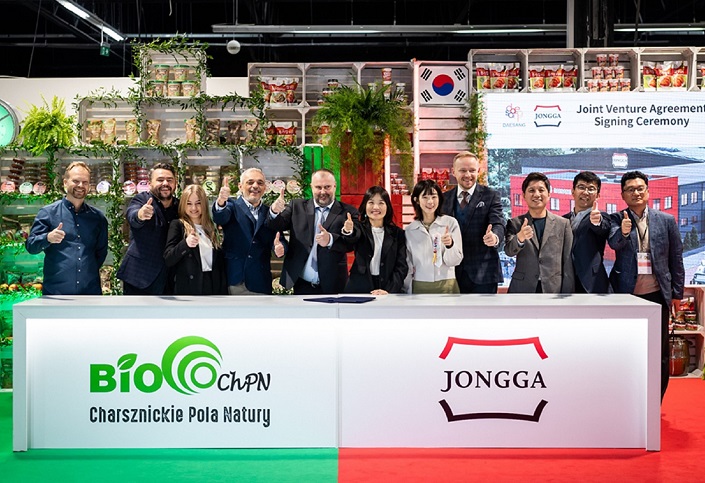 In this undated photo provided by Daesang Corp. on Nov. 7, 2022, Officials from Charsznickie Pola Natury (L) and Daesang pose for a photo after a signing ceremony held in Poland.

Daesang said it has agreed on a 76-24 joint venture called “Daesang ChPN Europe” with Charsznickie Pola Natury (ChPN), a Polish food company specializing in the production of fermented vegetable dishes, such as pickles and sauerkraut.

Under the joint venture, Daesang plans to distribute its Jongga kimchi products at large discount stores in Europe, including Carrefour, Auchan and German grocery store Lidl.

Jongga is a kimchi brand of the company. The brand alone had accounted for 60 percent of Korea’s kimchi exports as of the early half this year. Kimchi is a traditional Korean side dish normally made of fermented cabbage, salt and hot peppers.

The company also said it will invest 15 billion won (US$10.7 million) to build a 6,613-square-meter kimchi making factory in the southern city of Krakow by the end of 2024, with an annual production capacity of 3,000 tons of kimchi.

Daesang has 11 kimchi factories at home and abroad, including two overseas locations each in China and Los Angeles, California.

The company said it will designate Poland as an outpost for Jongga kimchi’s European expansion due to its accessibility for ingredients and proximity to other European countries, it said.

The company exported a total of US$67 million worth of kimchi last year, up 131 percent from 2016. Export volume of kimchi to Europe has grown on average by 20 percent every year since 2017, it said.