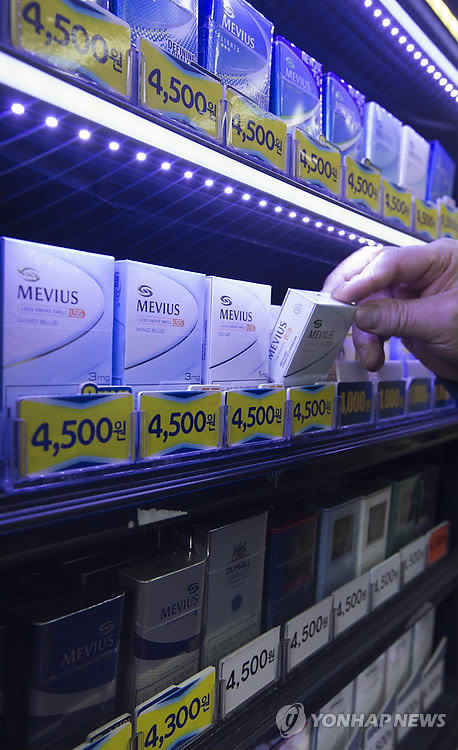 The last time that foreign brands outpaced local cigarettes was in 1986 when Philip Morris introduced the Marlboro brand to consumers.

According to one of the chains, KT&G’s market share in terms of sales value stood at 43.2 percent in the Jan. 1-29 period. In contrast, market share by foreign brands reached 56.8 percent.

The local producer lost its share as the government marked up prices of a pack of cigarettes by 80 percent, or by 2,000 won (US$1.82), this year. Officials said they were aiming to encourage people to quit smoking.

In terms of quantity, KT&G’s market share stood at 38.3 percent, while corresponding numbers for foreign rivals stood at 61.7 percent.

Such numbers were broadly repeated for the other convenience store chain that said KT&G’s sales share dropped to 46.2 percent in the first month of 2015, while in terms of quantity, numbers stood at 40.5 percent.

The chain said KT&G still was ahead of its rivals, but its lead has been eroded drastically compared to last year, while BAT’s market presence moved up sharply thanks to the popularity of such products as Vogue.

BAT’s Vogue sold for 3,500 won per pack, cheaper than the prices for most South Korean cigarettes that sold for 4,500 won.

This strategy was emulated by Philip Morris, which adjusted prices of its Marlboro and Parliament brands by 200 won each. These two cigarettes sold for 4,500 won a pack, the same as local brands.

KT&G projected that despite the company losing market share last month, such developments will not last for long.

“KT&G has maintained a market share in the low 50 percent range for quite some time, and this is not likely to be affected in the future,” a company official said.