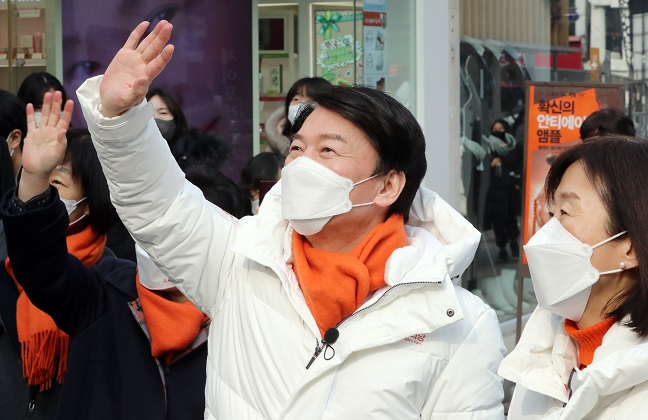 Ahn Cheol-soo, presidential nominee for the minor opposition People’s Party, waves to the crowd while on a campaign trail in Cheongju, some 140 kilometers south of Seoul, on Jan. 9, 2022. (Yonhap)

SEOUL, Jan. 13 (Korea Bizwire) — Foreign investors have been buying shares of the firm founded by Ahn Cheol-soo, the presidential candidate of the minor opposition People’s Party and the largest shareholder.

According to the Korea Exchange, foreigners recorded net purchases of more than 170,000 shares of AhnLab Inc., South Korea’s biggest anti-virus software company, on the over-the-counter market in a single day on Monday.

It was the first time for foreign investors to net buy or sell more than 170,000 shares of AhnLab in a single day over the past year.

The primary factor behind foreign investors’ appetite for AhnLab shares is the recent hike in the popularity of the presidential candidate.

In last week’s poll on who is more suitable candidate if main opposition presidential candidate Yoon Suk-yeol and Ahn Cheol-soo decided to unite under one candidate, 41.1 percent of the respondents chose Ahn, compared to only 10.5 percent for Yoon.

However, even if Ahn is elected as the president of the country, it’s virtually impossible for him to give preferential treatment to his own company.