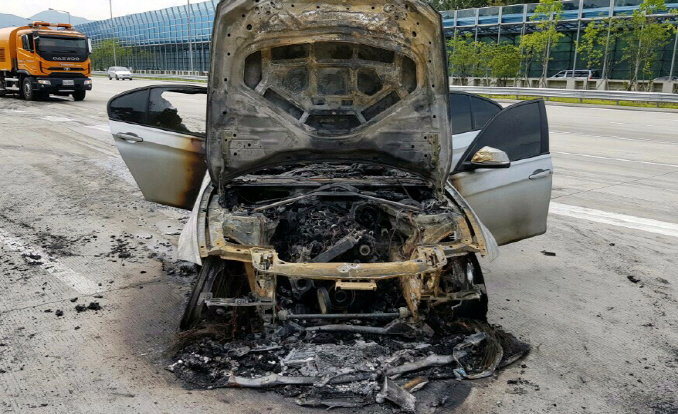 SEOUL, Aug. 11 (Korea Bizwire) — While the controversy surrounding BMW engine fires continues to rage in South Korea, the atmosphere in the carmaker’s home country of Germany is relatively calm.

Although BMW recently decided to launch a recall of its problematic vehicles in Europe, the move has not received the type of media attention garnered by its Korean counterparts, a far cry from the police investigation to be carried out concerning the issue in Korea.

The Minister of Land, Infrastructure and Transport Kim Hyun-mee even called on BMW to assume responsibility for the spate of engine fires that has plagued the German brand’s vehicles in Korea.

Before BMW decided to recall its vehicles in Europe on August 7, the top newspapers and TV media outlets in Germany had reported almost nothing regarding the crisis that was ongoing in South Korea.

This was also the case for Frankfurter Allgemeine Zeitung, a German newspaper that was the first to report on the European recall.

As the newspaper with the largest readership in Germany, Frankfurter Allgemeine Zeitung only reported briefly about the recall of the German cars sold throughout Europe. The situation is the same for Germany’s public television stations.

ARD and ZDF aired reports on the recall in Europe and did not report much on what was happening in other parts of the world before the recall was announced three days ago.

The broadcaster Deutsche Welle, however, cited dpa, a German newswire service, to report briefly on the recall in Korea and the press conference in which BMW officials apologized regarding the situation.

The major news organizations in Germany have traditionally taken a friendly stance towards the country’s car industry, the largest source of national income.

German car producers not only provide major advertisement deals to leading news agencies, but also influence all sectors of German society including the arts and culture.

Even the political leader of Germany, Chancellor Angela Merkel, showed signs of weakness when it came to creating new jobs in the automobile production sector. Over 800,000 jobs are linked to the car manufacturing process in Germany.

Although Merkel was very critical of the Volkswagen emissions scandal that surfaced in 2015, she has also been very tolerant of diesel engine cars that showcase the technical advancement of Germany.

Merkel’s yearly visits to China are primarily to help German carmakers pave their way into the Chinese market, say experts.