As more and more people care about health and healthy lifestyle, there emerged groups of runners and gym-goers called “Night Exercisers.” (image: paulaloe at flickr)

SEOUL, South Korea, Oct 17 (Korea Bizwire) — The average time for Koreans to go to bed is getting late. Last year, Gallup Korea conducted a survey on 1,218 men and women over 19 years of age about their time to sleep, get up, and average hours of sleep. The results were: the average time to go to bed was 11:39 pm, with 26 percent of respondents answering that they sleep past 11 pm and about 50 percent saying it’s around 12 midnight.

Why are they sleeping late? It is because of excessive workload? According to a survey held by JobKorea, job portal, last year on 401 office workers, 53 percent of those in their 20s and 30s said they take the day off regardless of whether their bosses are still in the office or not. Another survey on office workers’ lifestyle by LG Economic Research Institute in 2011 reported that 36 percent of respondents said they don’t spare money on their health such as gym admission fees.

As more and more people care about health and healthy lifestyle, there emerged groups of runners and gym-goers called “Night Exercisers.” Not restricted to young people in their 20s and 30s, older men and women are also joining the trend, spending their evening time after work on walking and light exercise outdoors. To take advantage of the trend, some companies are holding promotional events specifically customized for them. Energizer Korea is one such company. It recently held an annual marathon event “Energizer Night Race 2013″ in which more than 10,000 participants ran through the dark night with their head lanterns on at Seoul’s Sangam World Cup Park. As part of a global corporate social responsibility campaign “That’s Positive Energy,” the night marathon running festival began at 6:30 pm with 5-kilometer run participants starting first, which was followed at 7:30 by 10k runners.

Earlier on the same day, the company held promotional events such as the push-up contest, the 10,000-steps-a-day challenge, and a music concert featuring Geeks and Daybreak. Themed with a slogan “The world is brighter if you run together,” this year’s running event also included a tree-planting event, a used battery collecting campaign, and a used clothes donation drive.

Earlier on September 29, athletic shoe maker Puma Korea held a similar event called “Night Run Marathon” at Seoul Grand Park in Gwacheon in the south of Seoul. All participants came out with their glow-in-the-dark running shoes, which made a spectacular scene combined with the laser lighting show.

Even without joining big events like these, anyone can exercise in the evening time. In response, many municipal city governments and private operators are opening nighttime exercise programs in droves. For example, the Anyang city government has recently opened a “Night Outdoor Exercise Classroom” and “Night Owl Exercise Classroom.” The programs hire expert trainers and teach program participants a variety of exercise and sports games. Nearby Euiwang City is also running a nighttime exercise class for its residents. 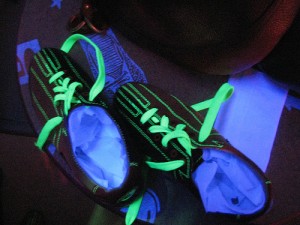 Some of the outdoor clothing purveyors have come up with new items specifically customized for the nighttime exercisers. (image: Carolyn Coles at flickr)

Naturally, sports gear companies are keenly paying attention to this trend. Some of the outdoor clothing purveyors have come up with new items specifically customized for the nighttime exercisers, such as the reflection wind jacket by Isenberg that is ideal for night hiking and exercise as it is highly sensitive to light sources so it’s easier for motorists or other pedestrians to spot the person wearing it. The company reported that the sales of its night exercise-related items in the month of June rose more than 50 percent over the previous month.

Puma Korea has launched new glow-in-the-dark running shoes “Mobium Elite” for nighttime runners. The shoes feature bright colors such as green, orange, and red to help the runners protect from traffic. Another outdoor brand Black Yak recently unveiled a new hiking boot line “Cherokee” that is ideal for trekking or light hiking in nearby mountains and hills. Earlier in April, Nepa has introduced a “Reflect Series” line of waterproof jackets, hiking boots, and backpacks for those enjoying nighttime hiking.

According to research results by University of Chicago medical team, moving one’s body after 7 pm can increase the exercise efficiency by stimulating the adrenal cortical hormone and thyroid hormone that are related to the body’s metabolism. In addition, most doctors agree that nighttime exercise is good for diabetics and high blood pressure patients as night is the time of the day at which blood pressure goes to the lowest level. If you wonder what all the other people are doing after dinner taking to the street, it’s time for you too to get out of the couch and get some exercise.

And another simple but extraordinary night workout according to experts: walking. Walking is said to be a great exercise which has proven to improve your blood circulation and strengthen your muscles. It is important to walk “properly” to enjoy varied benefits from this workout. First of all, you should walk looking forward, staring at the distance of 10~15 meter ahead. And point chin a little down and make sure you would not walk with your chest too much thrown forward; Stand tall with a slightly lifted chest and a straight back while moving your arms back and forth rhythmically. Don’t strike the ground with your toe first; use your heel first.Walking about 30 minutes five times per week does wonder and “brisk walking” can enhance the flexibility and muscle toning over your back.

One thought on “[Kobiz Feature] The Rise of New Breed: Night Exercisers”