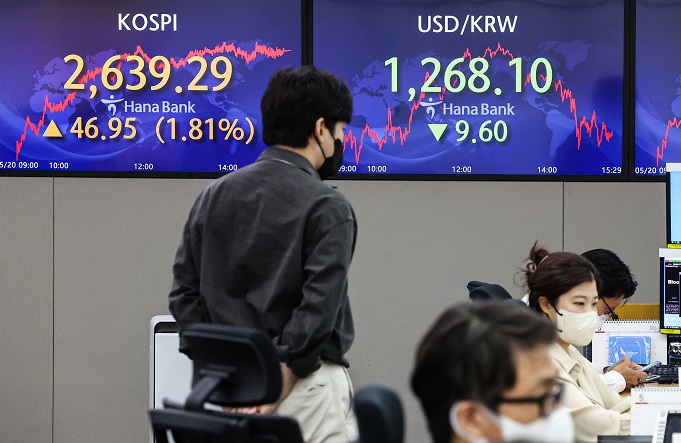 Electronic signboards at a Hana Bank dealing room in Seoul show the benchmark Korea Composite Stock Price Index (KOSPI) closed at 2,639.29 points on May 20, 2022, up 46.95 points or 1.81 percent from the previous session’s close. (Yonhap)

SEOUL, May 22 (Korea Bizwire) — Foreign investors have sold nearly 15 trillion won (US$12 billion) worth of South Korean stocks this year through mid-May as they fled to safe haven assets amid growing stagflation worries, the country’s main bourse said Sunday.

They sold 5.1 trillion won worth of Samsung Electronics stocks and 2.9 trillion won of LG Energy Solution shares during the cited period.

Institutional investors also sold 9 trillion won worth of local stocks, including 6.08 trillion won of Samsung stocks. The massive selling weighed on the benchmark KOSPI and the tech-heavy KOSDAQ indexes.