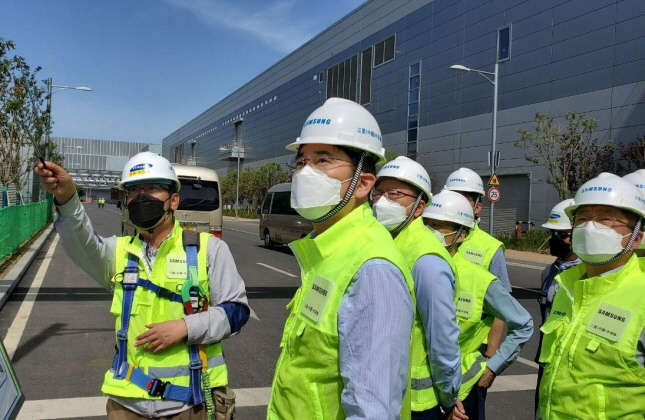 SEOUL, May 18 (Korea Bizwire) — Samsung Electronics Vice Chairman Lee Jae-yong on Monday visited the company’s chip factory in China to assess its business plans to overcome the virus crisis amid the reopening of the world’s No. 2 economy.

Lee, the de facto leader of South Korea’s top conglomerate, inspected Samsung Electronics’ chip plant in Xian, some 1,000 kilometers southwest of Beijing, and encouraged workers there trying to overcome the fallout from the pandemic.

“The company should not be held back by the past and must not be satisfied with the present. To ensure new growth engines, we need to be preemptive and be prepared for forthcoming changes,” Lee said in comments provided by the company.

“We have no time, and we cannot lose this moment.”

This is Lee’s first overseas business trip since January, when he visited Brazil before the novel coronavirus became a global problem. Lee previously visited the Xian plant in February last year.

South Korea and China began to operate a fast-track entry system this month, which exempts business travelers from 14-day mandatory isolation, in a move to help minimize the fallout from entry curbs prompted by the novel coronavirus pandemic.

Lee, the only son of bedridden Samsung chief Lee Kun-hee, reportedly received a virus test upon his entry to China, where COVID-19 first emerged late last year, according to sources.

The Xian plant is Samsung’s only foreign memory chip factory. The South Korean tech giant last year revealed it will invest an additional US$8 billion in the plant and sent some 200 engineers last month for the expansion of the second Xian plant.

The tech giant earlier announced it plans to inject billion of dollars into the plant, which is an integral part of its drive to become the largest systems chip manufacturer in the world by 2030.

The vice chairman’s trip is seen as showing the company’s resolve to meet the target despite various challenges, such as the COVID-19 outbreak and trade disputes.

The chip industry, as a whole, faces growing uncertainties over a renewed trade row between Washington and Beijing, even though many countries around the globe have started to reopen their economies and lift virus lockdowns.

Lee’s visit came amid concerns that Samsung Electronics may come under pressure from the United States to join its move to cut off China’s Huawei Technologies Co. from global suppliers.

The U.S. Commerce Department on Friday said that foreign chip manufacturers using American chipmaking equipment and software will have to apply for a license before shipping chips to Huawei.

The company previously expected that memory demand would remain robust with the rising work-at-home culture, but its overall second-quarter performance may not be impressive, as the pandemic will significantly affect demand for some of its key products, including smartphones.

Company sources said that Lee will not be placed in self-quarantine for two weeks after returning from China, although he will be allowed to go home only after being tested at the airport.

The businessman, on the other hand, will be under close monitoring to make certain he does not show symptoms of the infectious illness.