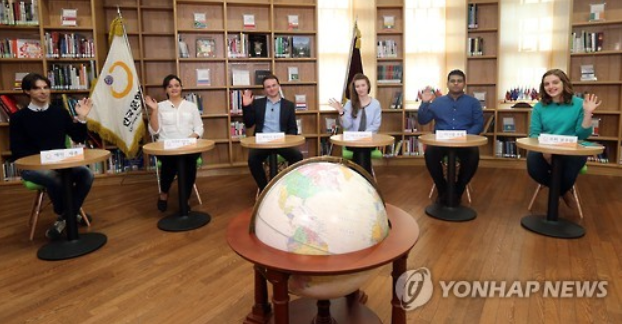 Six translators discuss Korean literature translation in a panel discussion that is organized by the Literature Translation Institute of Korea and held at the Seoul Metropolitan Library on April 18, 2016. (Yonhap)

In the closed-session organized by the Literature Translation Institute of Korea, translators from England, Germany, India, France, Mexico, and Uzbekistan, shared their experiences of and thoughts on translating Korean books into their respective languages. All translators either finished or are attending a translation program run by the institute.

Irma Zyanya Gil Yanez, a translator from Mexico, said Korean literature is a “means to get to know a real Korea,” which, she said, isn’t always easy to do so by listening to K-pop or watching Korean TV shows.

“In literature, Koreans seem freer in expressing their thoughts on social and personal issues than they do in real life. So I think reading a Korean book is very helpful to understand the Korean society.”

She became interested in Korean while she was teaching Spanish to Koreans in 2007-2009. In December 2015, she translated Koo Byung-mo’s “Wizard Bakery” into her native language, which got wide attention among young Mexican readers.

The most perplexing question when translating, she said, is how to smoothly provide readers with social and traditional contexts without ruining the original text.

“How can I explain to Mexican readers the meaning of living in an apartment, or the role of the first son in a Korean family?” she asked.

The state-run institute operates the translation academy which runs weekday and weekend programs to train professional translators, with an aim to promote Korean literature more globally, at a crucial time when a growing interest in the Korean pop culture is spilling over other areas like literature and food.

According to Oh Eun-ji, associate manager at the institute’s Cultural Exchange &amp; Public Relations Team, a rising number of applicants have no Korean background at all, an interesting departure from the recent past when many applicants used to be Korean descendants. She also added the level of their Korean has gotten surprisingly better.

In the past few years, Korean literature has gained more global recognition.

Fiction writer Han Kang has recently become the first Korean who has been shortlisted for the 2016 Man Booker International Prize with her novel “Vegetarian.” Previously, popular novelist Shin Kyung-sook’s “Please Look After Mom” has been internationally acclaimed and won the 2011 Man Asian Literary Prize.

Asked what it means for them to translate Korean literature, Benedikt Pleyer from Germany said “it is like watching the sunrise” in a sense that “rising Korean literature is spreading its own rays of lights and enlightment to the world.”

British translator Sophie Bowman emphasized the power of literature and importance of translation.

“I was deeply touched when my father shed tears after reading Park Hyoung-su’s short novel ‘Arpan’ that I had translated into English and sent him via email.”

The three-hour event was filmed in its entirety and will be made into four edited versions and uploaded onto YouTube by mid-May.

“This video clip will be a good guide to people who are familiar with Korean pop culture but don’t know much about Korean literature,” Oh said, adding that “We also hope this will be helpful for those who consider applying for a translation program at the institute.”
(Yonhap)