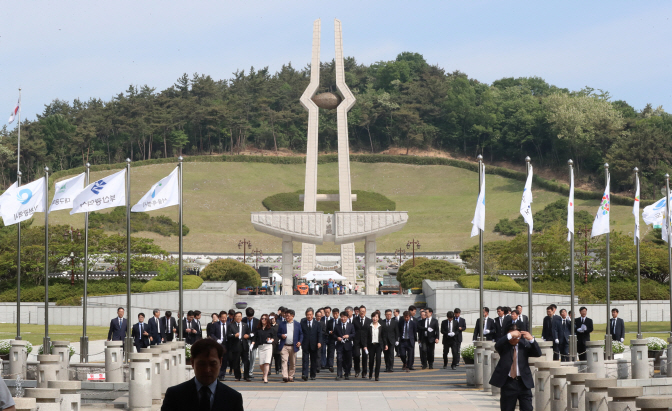 GWANGJU, May 17 (Korea Bizwire) — On the occasion of the 39th anniversary of the May 18 Democratization Movement, overseas tourists are increasingly interested in “dark tourism” where one can learn lessons from tragic history.

According to the city of Gwangju and the Gwangju Convention and Visitors Bureau on Thursday, the city is operating a “Dark Tour of the May 18 Democratic Movement”.

This year, the tour will be held seven times targeting tourists from Japan and other countries.

In January, 14 Japanese tourists visited Gwangju and looked around major historical sites, including the May 18th National Cemetery, the main gate of Chonnam National University and the former South Jeolla Provincial Office, to feel the noble spirit of the 1980 pro-democracy uprising.

On the week that includes May 18, twenty Japanese tourists will visit Gwangju on Friday and Saturday to visit major historical sites and meet with bereaved families to hear vivid anecdotes of the tragic history.

Furthermore, from June to December, a total of five overseas tours are scheduled to follow the path of the May 18 Democratization Movement.

Japanese tourists are not the only interested group, but organizations in the U.S. and three other countries are also reportedly interested in the program.

“Just as the Berlin Wall that blocked East and West Germany has become a representative tourist destination for dark tourism, we will try to become a city that can teach overseas travelers a lesson in history,” said Lee Myung-soon, head of Gwangju’s tourism promotion department.