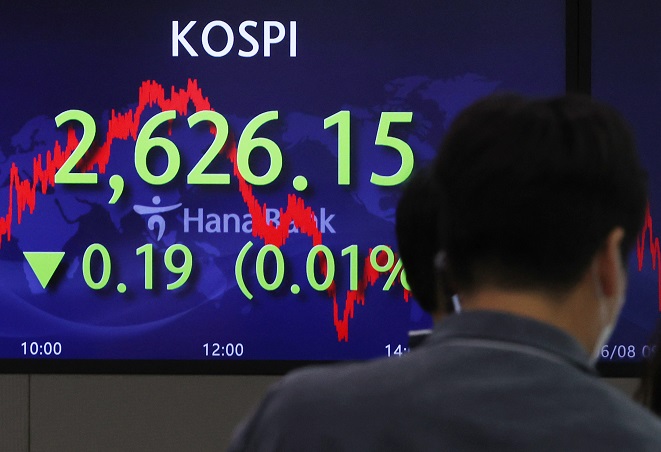 An electronic signboard in the dealing room of Hana Bank in Seoul on June 8, 2022, shows the benchmark Korea Composite Stock Price Index (KOSPI) having fallen 0.19 point, or 0.01 percent, to close at 2,626.15. South Korean stocks finished nearly unchanged, weighed by concerns about inflation and an economic recession. (Yonhap)

SEOUL, June 9 (Korea Bizwire) — Foreigners withdrew more money than they injected into South Korea’s stock markets for the fourth straight month in May amid worries over economic slowdowns in major countries and the fallout from the ongoing war in Ukraine, central bank data showed Thursday.

Net foreign money outflows from the main bourse, KOSPI, and secondary tech-heavy KOSDAQ markets, came to $1.29 billion last month, according to the data from the Bank of Korea (BOK).

This represented the fourth straight month that foreigners had pulled out more money than they parked in local equities. But the figure was much smaller than the previous month’s net outflows of $4.26 billion.

South Korea’s stock markets have been weighed down by worries over tightening monetary policy in advanced countries and corresponding economic slowdowns.

Market woes have also been amplified by the protracted war in Ukraine, which has propelled oil and key commodity prices even higher and added to inflation woes.