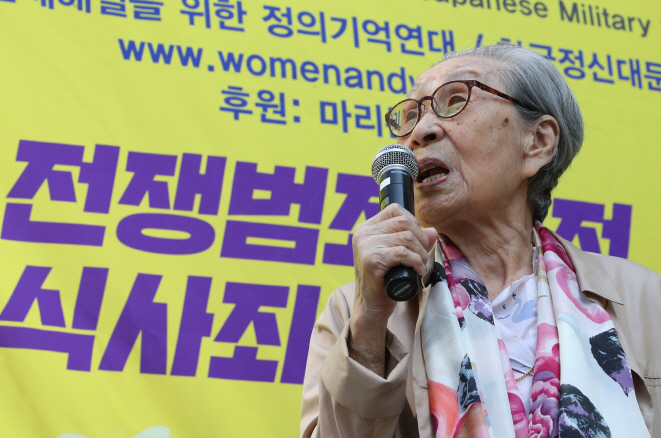 SEOUL, Oct. 4 (Korea Bizwire) — Regarding the Japanese Self-Defense’s unwavering stance on hoisting the flag of the rising sun during an upcoming international naval review to be held in Jeju, participants at the weekly “Wednesday Demonstration” also criticized the decision.

The civic group “Justice for the Comfort Women,” which held the 1,355th weekly Wednesday Demonstration yesterday in front of the former Japanese Embassy in Jongno-gu, Seoul has been calling for a resolution to the Japanese sex slave issue.

Yun Mi-hyang, the leader of the Justice for the Comfort Women, pressed the government to scrap the agreement that was struck between South Korean and Japan regarding the comfort women issue while criticizing Japan’s decision to carry the flag of the rising sun at the naval review in Jeju.

“We must all speak out so that the Japanese naval ship does not raise the flag that symbolizes Japan’s past aggression in Jeju,” said Yoon.

Kim Bok-dong, a 92-year-old former victim of sex slavery, said that “the Japanese government must apologize.”

Kim also had a special message for Japanese Prime Minister Abe. “Be sure to tell Abe that the flag of the rising sun must not be brought into Jeju,” said Kim.

Over 1,000 people participated in the Wednesday Demonstration that was held yesterday, coinciding with a national holiday in South Korea. Another victim, 90-year-old Gil Won-ok, was present at the meeting alongside Kim Bok-dong.

A few Japanese were also present at the meeting, which caught the attention of those at the gathering.

Morimoto Tadanori, a 74-year-old resident of Nara Prefecture, said that by joining hands, civic groups in both nations could become more powerful in tackling this issue.