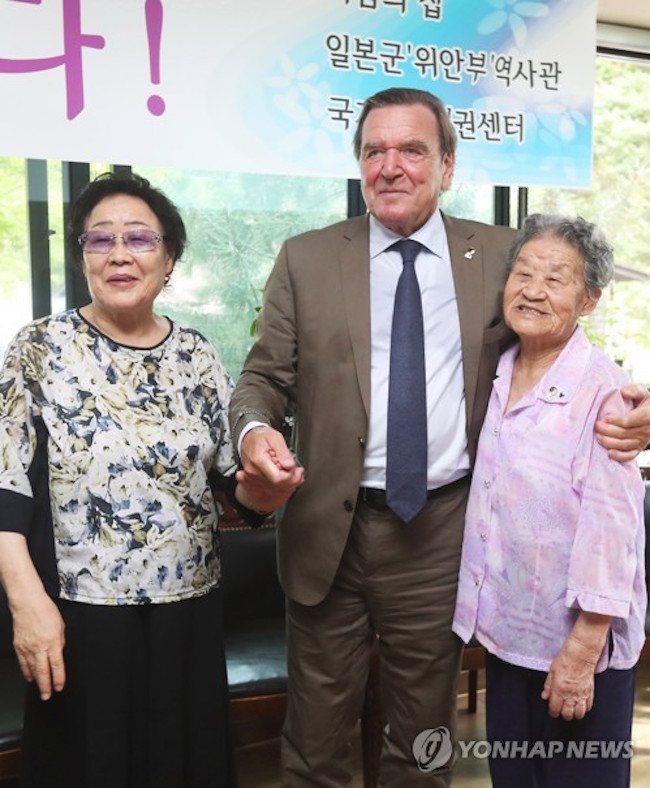 Schroeder arrived at the House of Sharing in the afternoon, a shelter on the outskirts of Seoul set up for the victims who were forced into sexual enslavement by the Japanese military. He met with four surviving victims, all in their 90s, including Lee Ok-sun and Lee Yong-soo.

Some 200,000 young women are estimated to have been taken to the front-line brothels to serve Japanese soldiers in the war that ended in 1945. There are only 35 surviving South Korean victims.

“It’s regrettable Japan hasn’t taken courage to speak of the violence (it committed) or talk to those who were sacrificed by the brutality of the war,” the veteran politician said.

The former head of the European country offered words of consolation on the rare occasion, holding his hands tight with the victims as he embraced each one of them.

“The undeserved violence inflicted on these ladies is irreversible. I am saddened to meet with such people. The world needs to know the painful history,” he said.

He also called on Japan to admit to its guilt and apologize over what it did, as is the last wish from the victims who have said they are not asking for it out of revenge or hatred, but in acknowledgement of what it did in the past.

“I, too, earnestly want it to happen in my lifetime.”

The 73-year-old, who led his country from 1998-2005, expressed full support for the Seoul government’s move to push for recommending the victims as candidates for the Noble Peace Prize, saying “they are more than eligible.”

He also paid his respects to the memorial monument for the comfort women, a euphemistic term for the sexual slavery victims, and visited the museum established for the victims.

Earlier in the day, Schroeder delivered a speech at the National Assembly, in which he backed South Korean President Moon Jae In’s policy principle toward resuming talks with North Korea.

He said Moon should adhere to his stance “even though it may be a tough road,” despite the heightened tension on the Korean Peninsula following the North’s nuclear test on Sept. 3 deemed to be the most powerful.