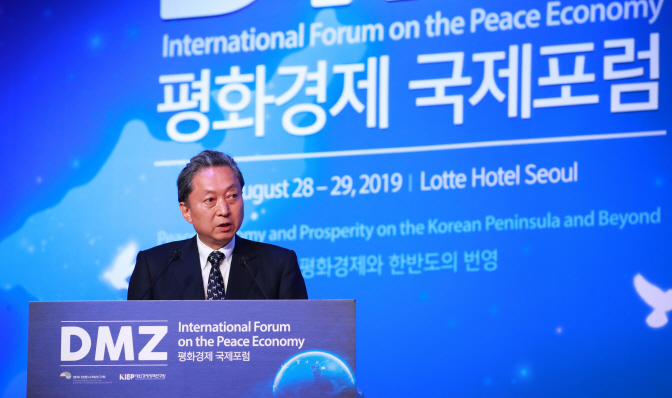 SEOUL, Aug. 29 (Korea Bizwire) — Japan should try to resolve a deepening row with South Korea by returning to its previous acknowledgement that individual claims to damages for wartime forced labor were not fully addressed by the 1965 normalization treaty between the two countries, a former Japanese leader said Thursday.

Former Prime Minister Yukio Hatoyama made the case during a peace forum in Seoul, urging both countries to take swift steps and work out ways to settle the dispute through dialogue, as deteriorating ties will benefit nobody.

“The Japanese government should go back to its judgment that as for the issue of laborers, the individual rights to claim damages were not completely and finally resolved in the 1965 treaty,” said Hatoyama, who served as prime minister in 2009-2010.

South Korea and Japan are embroiled in a bitter dispute that is now spilling into the economic and security arenas, following South Korean Supreme Court rulings that ordered Japanese companies to compensate Korean victims of forced labor under Japan’s 1910-45 colonial rule.

Tokyo argues that all reparation matters were settled in the 1965 treaty that normalized diplomatic ties. Seoul says the court rulings should be respected as it recognized the individual rights to claim damages.

Hatoyama said that Shunji Yanai, then director of the treaty bureau at Japan’s foreign ministry in 1991, told a parliamentary session at the time that the normalization treaty did not put an end to individual rights to damages.

“It was the official view of the Japanese government in the past, that (forced labor issue) was not finally and completely resolved by the treaty,” he said.

To mend ties, Hatoyama called for both sides to quickly have consultations and take necessary measures desired by each side, including dropping the export curbs on Seoul and stopping retaliatory moves.