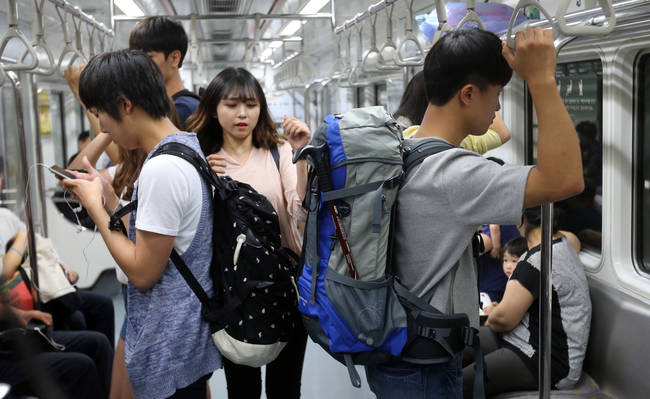 Backpacks can take up valuable space especially in crowded cars. They can block paths or even hurt others with their edges in extreme cases. (image: Yonhap)

BUSAN, April 6 (Korea Bizwire) – The Busan Metropolitan Government is spearheading a campaign that guides subway and public bus riders to wear their backpacks on their front instead of their back – not to prevent pickpocketing, but as proper etiquette to avoid bumping other passengers.

There has been a growing chorus of criticism among the public in Korea that subway riders should wear their backpacks on their front, or place them on the floor or the overhead rack.

In reality, backpacks can take up valuable space especially in crowded cars. They can block paths or even hurt others with their edges in extreme cases.

The Busan government said Wednesday that its campaign, which is dubbed “Bag Hug,” will promote better etiquette for public transportation users to ultimately improve the convenience of passengers, and eliminate any emotional and physical stress that can result from the experience.

The campaign will be mainly publicized via PA announcements on subways and buses, but officials expect voluntary efforts from schools and public institutions in the city.

“Public etiquette is equally as important as the quality of transport for a more pleasant public transit experience,” said Lee Seung-joon, director of the transportation bureau. “We’ll continue our campaign until ‘Bag Hug’ becomes part of our citizens’ daily lives.”