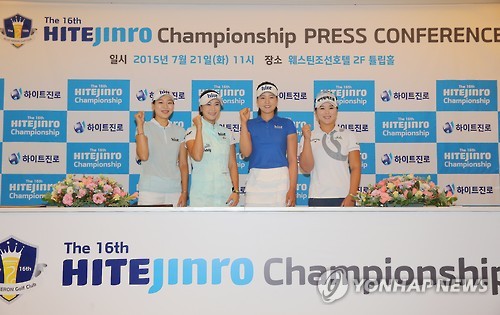 At a press conference held by the Korea Ladies Professional Golf Association (KLPGA) Hite-Jinro Championship at the Westin Chosun Hotel, golfers created a light atmosphere as they talked about how they release stress. (image: Yonhap)

Seoul, July 22 (Korea Bizwire) – How do female golfers blow off steam when they have matches every week?

At a press conference held by the Korea Ladies Professional Golf Association (KLPGA) Hite-Jinro Championship at the Westin Chosun Hotel, golfers created a light atmosphere as they talked about how they release stress.

First, Jeon In-ji (21, Hite-Jinro), who dominated the US Women’s Open recently, says that she is into drones. “I like making stuff. I used to put together nano blocks, but my mother stopped me because we’re moving next month, and nano blocks are hard to pack. So I bring drones to the field and fly them with my father.”

Seo Hee-kyung (29, Hite-Jinro), who returned to the field after giving birth in August last year, says that she keeps a diary. “After I got married and became a mother, I have house work to do, and a baby to look after. So I don’t have much ‘alone time’. When I was in the States, I kept a diary to reflect on myself. Looking back at how far I’ve come helps me to overcome the difficulties I have now.” She also gave some witty advice to the younger players.

“I’ve been playing golf for the past 20 years, but I think now is the happiest time for me. I hope the younger players make time to date, find ‘the one’ and get married, so that they can experience the feeling of being able to perfectly focus on golf.”

Jo Yoon-ji (24, Hi-one Resort), the winner of the BMW Ladies’ Championship, which was held last week, expressed her love of shopping. “Actually, I bought a case for my smartphone yesterday. It helps to improve my performance even when I buy something cheap, because I get happy.”

Kim Ha-nul (27, Hite-Jinro) suggested building blocks were a good companion. “When I assemble blocks, time flies. I think it’s a great hobby for players who are single. Now, I have a new interest in making aroma candles.”