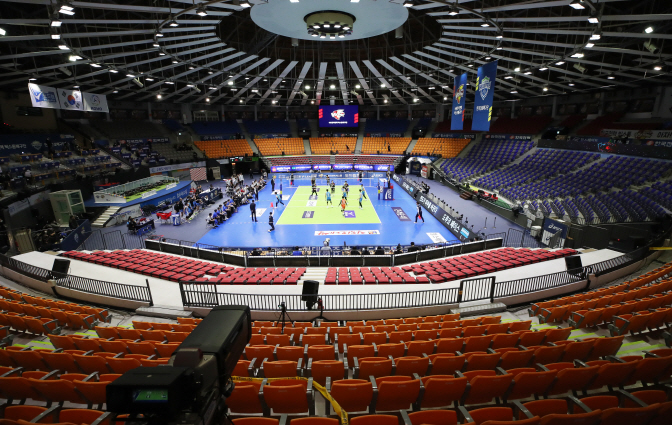 SEOUL, March 4 (Korea Bizwire) — If a volleyball player hits a spike, and no fan is around to witness it, does it make a sound?

Imagine playing volleyball in an empty arena of 5,000 seats. It can be exactly as eerie and disorienting as it sounds.

We’re not talking about some recreational match by weekend warriors, but a high-stakes, professional contest played by athletes who are being paid handsome amounts of money to chase down and spike a white ball.

Speaking of which, the sound of vicious spikes reverberated through the empty Suwon Gymnasium with an unusual resonance and bite on Feb. 25, as the arena, located some 45 kilometers south of Seoul, hosted the country’s first crowdless professional volleyball game.

The Korean Volleyball Federation (KOVO) had decided two days earlier that its men’s and women’s V-League games would take place behind closed doors until further notice, joining other local sports organizations in a fight against the spread of the deadly novel coronavirus.

And for the men’s contest that evening between the home team Kepco Vixtorm and Samsung Fire & Marine Insurance Bluefangs, only the players, their coaches and team officials, plus a few members of the media, were on hand.

Park Chul-woo, veteran opposite hitter for the Bluefangs, said it was so quiet in the arena that he could even hear the ball going off a blocker’s fingertips.

“I once played in front of about a dozen fans when I was still a student, but I’ve never played in a completely empty arena before,” the 34-year-old said after scoring a season-high 36 points for his team’s five-set victory.

“I just tried not to lose my concentration.”

The “further notice” from the KOVO came on Monday, when it suspended the men’s and women’s V-League action indefinitely.

The decision came hours after representatives from 13 V-League teams unanimously requested that the season be put on hold, as the number of confirmed COVID-19 cases continued to surge nationwide.

Then last Saturday, the KBL announced it will suspend its regular season play after learning that one of its teams, KCC Egis, had stayed at the same hotel as a COVID-19 patient in Jeonju, 240 kilometers south of Seoul, earlier in the week.

The KBL season is scheduled to resume on March 29.

The WKBL, which first closed its doors to fans on Feb. 21, chose not to follow suit, on the grounds that the players would be safer if they remained inside their team dormitories as the league action went on.

But at this juncture, that seems more like desperate hope than sound reasoning. 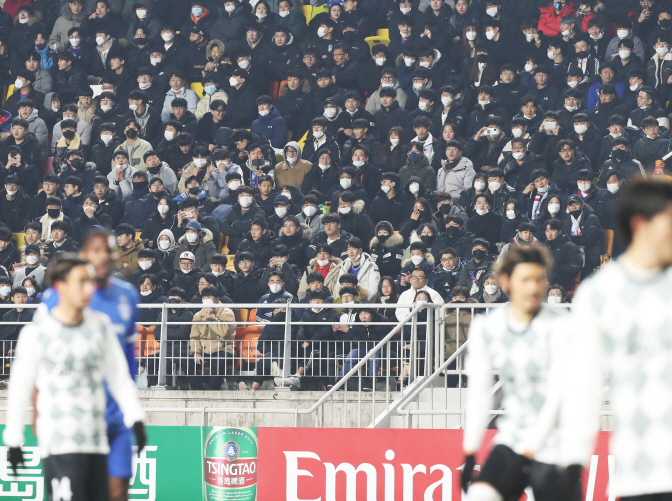 Also late last month, football’s K League postponed the start of the 2020 season. The season would have kicked off last Saturday, if not for the recent surge in COVID-19 infections.

The Korea Baseball Organization (KBO) canceled all preseason games, which would have run from March 14 to 24. But then it has been curiously reluctant to postpone the start of the regular season, which is set for March 28.

KBO officials and general managers from the league’s 10 clubs met Tuesday, with the expectation being the league would immediately join others in adjusting the schedule in light of the virus outbreak.

Instead, the KBO said it will meet again with club officials next week for further discussions on a potential postponement.

The objective is to make the final decision on the schedule by March 14, which would give teams two weeks to prepare for the normal start of the season.

For athletes accustomed to hearing crowd noise and feeding off fans’ energy, playing to thousands of empty seats could disrupt their usual rhythm.

It’s no different for coaches. Hours before the KBL brought the regular season to a halt on Saturday, SK Knights head coach Moon Kyung-eun said he found the atypical silence at games oddly distracting.

“This has been a fun season, with a tight battle for playoff spots, and it’s really disappointing not to have fans at games,” Moon said. “They say pro sports can’t exist without fans, and that has really hit home.”

But these are minor inconveniences, when people are dying of the virus.

“It’s not just volleyball. Our whole country is being affected,” Park Chul-woo said of the virus. “A lot of people are suffering out there. I hope we’ll overcome this adversity and we’ll soon be back to normal on the court.”

Lee Jae-yeong, a star attacker for Heungkuk Life Insurance Pink Spiders in the women’s V-League, said after last Saturday’s game that she didn’t even feel that happy about her team’s victory because it came without fans in the stands.

“Not having our supporters with us is bringing us down,” Lee said.

“The arena is too quiet. We all want to play in front of our fans and we hope the situation gets better quickly, so that people won’t have to worry about their well-being when they’re watching volleyball.”

At the beginning of the year, only the events scheduled to take place in China, the epicenter of the virus, were being affected, with limited, indirect influence on South Korea.

As a result, the South Korean clubs that were to face those Chinese opponents had to scramble to find new home dates, instead of traveling to China for away matches.

Little did they know that the situation would change dramatically in the ensuing weeks.

Ryu Dae-hwan (C), secretary general of the Korea Baseball Organization, presides over an executive committee meeting with general managers of KBO clubs at the KBO headquarters in Seoul on March 3, 2020. Those not in attendance took part in the meeting via video conferencing. (Yonhap)

With its signature club tournament, the AFC went from merely pushing back Chinese home matches to postponing all matches involving Chinese clubs.

That had the unintended effect of also messing up domestic fixtures for the participating K League clubs.

And as the virus started to take a foothold in South Korea, the K League season itself was thrown into further chaos on Feb. 24, when the league postponed the start of the 2020 season.

Other football events were affected, as AFC Champions League matches involving South Korean teams were pushed back during the last week of February.

In one instance, a match was rescheduled because a Malaysian club refused to travel to Seoul.

In addition, an Olympic women’s football qualifying playoff between South Korea and China has been postponed from March to April.

Yongin, 50 kilometers south of Seoul, refused to host the South Korean home leg following the coronavirus outbreak in the city, while the Chinese leg was long moved to Australia.

Asian teams are currently in the second round, which was scheduled to resume on March 26, but it seems unlikely the round will go on as scheduled. The AFC will meet with FIFA later this week to settle on new dates for postponed matches.

Once the calendar flipped to March, it became easier to identify which domestic sporting events were still going on, instead of those that had been called off. In pro sports, only women’s basketball is still ongoing.

Internationally, K League clubs participating in the AFC Champions League will play away matches in countries other than China, but that, too, could change.

In times of trouble, people often turn to sports for distraction, hoping that great feats of athletic accomplishment on the field, court or ice can take their minds off whatever is ailing them.

But that hasn’t been the case in South Korea over the past several weeks.

With games called off, this public health crisis has robbed South Koreans of a chance to distract themselves with sports, precisely at a time when they would welcome such a distraction.

March is usually one of the busiest months in South Korean pro sports.

Volleyball and basketball leagues enter the final stretch runs before their playoffs, as teams jostle for positions. New football and baseball seasons start. Hope is supposed to spring eternal.

But gloom of uncertainty has taken over instead. That’s the new reality of South Korean sports in the spring of 2020.