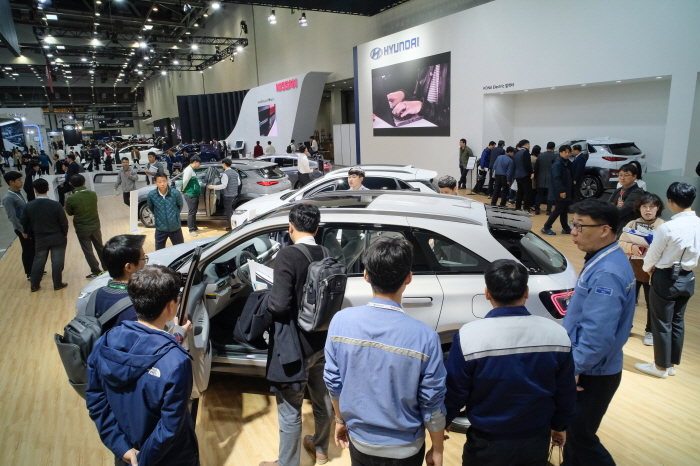 By the year 2022, the Daegu city will increase the number of EVs to 70,000, and 500,000 units in 2030, ultimately replacing half of the registered vehicles with EVs. (image: Daegu International Futuristic Automobile EXPO)

DAEGU, May 27 (Korea Bizwire) — The city of Daegu is planning to popularize futuristic vehicles and expand its base for futuristic automobiles in order to foster new growth industries.

According to the city on Saturday, local authorities are accelerating the transformation of the industry to futuristic cars in line with the changing trends in the auto industry, including the expansion of electric and autonomous cars.

The city had already supplied 7,800 electric cars as of last month, and plans to surpass 10,000 electric vehicles (EV) this year.

To this end, the government plans to allocate 82 billion won (US$70 million) and provide subsidies of up to 15 million won from a minimum of 13.56 million won depending on the vehicle type to those who purchase electric cars, and install 665 more public chargers by the end of the year to alleviate the inconvenience of using an EV.

Furthermore, the city will hold the Daegu International Futuristic Automobile EXPO 2019 in October to seek the direction of development of the auto parts industry and its entry into the global market.

It plans to provide industry trends and information through the EXPO, the third of its kind this year, and attract a large number of global car manufacturers and parts manufacturing companies to hold a representative expo for futuristic cars.

By the year 2021, an exclusive space for cars of the future will be built on the site of the Daegu National Science Museum in Dalseong County to allow citizens to experience the scientific principles of futuristic cars.

As a first step, the museum will use the indoor experience center as an experience space to provide information on the history of futuristic cars and technology changes.

Then, the museum will build an outdoor exhibition hall with future car exhibitions, industrial and educational facilities by January of next year.

An official from the Daegu city government reported that the city will maintain the ecosystem of the local auto parts industry in the short term and make efforts to invest in core technologies to expand the production of eco-friendly vehicles.