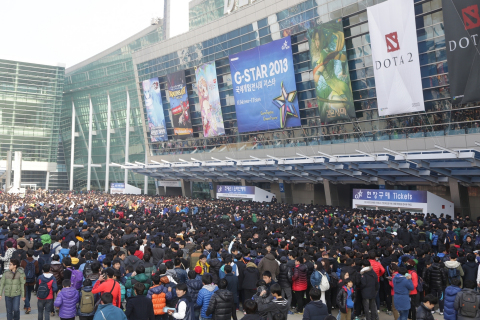 At the event of “G-STAR 2013,” 512 domestic and overseas game companies and other affiliated companies from 32 countries all over the world have attended. G-STAR2013 Outdoor View (Photo:Business Wire)

SEOUL, Korea, Nov 26 (Korea Bizwire) –‘G-STAR 2013’, which was attended by 512 game-related enterprises from 32 countries in the world, ended in great success after 4 days of ‘dreamful game culture festival’ with 188,707 visitors, a record number of actual people viewing the exhibition.

This year is the second year the K-IDEA(hereinafter referred to as ‘the Association’) sponsored the G-STAR event since it was transferred to a private organization, and it is considered that the Association has developed G-Star 2013 into the game business market of the largest scale in Asia and laid the foundation for the leap toward the globally leading exhibition event. It has also provided many diverse exhibition contents in addition to B2B and B2C Halls by starting the G-STAR Conference and through the expansion of G-STAR investment market.

This year, B2B Hall used the entire exhibition area of the new BEXCO building, and the number of overseas buyers paying for attendance showed an increase of more than 66.3% compared to last year (1,397 persons). Many of those who were involved in the domestic and foreign game industry and visiting the exhibition responded in unison by saying that ‘It is amazing to see the expansion of B2B Hall and increased participation by foreign companies’.

“G-STAR 2013”, which 512 domestic and overseas game companies and other affiliated companies from 32 countries all over the world have participated in, has set the all-time high record of export contract in the amount of 185,530,000 dollars, an increase of 25.4% over the previous year’s amount of 147,990,000 dollars.

It also expanded and operated the G-STAR Investment Market for those small-to-medium sized game companies that could not operate the booths in the B2B Hall. A total of 28 domestic and overseas investment companies and distributors, representing more than the number of companies who had applied initially, conducted business consultations on the 24 domestic game projects as well as game investment and distribution for the developers.

G-STAR Conference which was held this year for the first time has produced the outcome of drawing the audience of 577 visitors at the 3 keynote addresses and 36 lectures on game business and game technology.