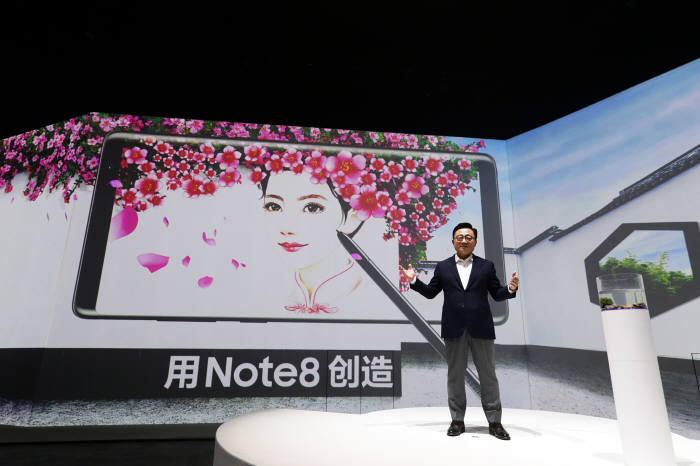 SEOUL, Sept. 14 (Korea Bizwire) — Samsung Electronics Co., South Korea’s tech behemoth, said Thursday that its latest high-end smartphone, the Galaxy Note 8, will be launched in China later this month to tide over a slump in one of the world’s largest smartphone markets.

The phablet will hit Chinese shelves on Sept. 29, according to Samsung. The world’s largest manufacture of smartphone held a launch event in Beijing on Wednesday.

The device will come with three storage capacities of 64GB, 128GB and 256GB, and in three colors — black, orchid gray, and blue.

Samsung also said it has partnered with WeChat Pay, a mobile payment platform service, in a move to expand into the fast-growing mobile payment market there.

The partnership would allow Samsung Pay users in China to make payments at almost all retail outlets that accept credit cards, debit cards and membership cards, the company said.

“China is the most important market,” Koh Dong-jin, president of Samsung Electronics, was quoted as saying during the launch event. “Samsung Electronics will make a persistent effort to receive further trust from Chinese customers based on the company’s technology.”

Samsung’s share of the Chinese smartphone market for the second quarter is estimated at 3 percent, remaining in the doldrums, as Chinese rivals continue to roll out price-competitive models.

According to the data compiled by Counterpoint Research, Chinese smartphone makers took up 87 percent of their home market in the April-June period. The top four brands — Huawei Technologies Co., OPPO Electronics, Vivo Mobile Communications Co., and Xiaomi Inc. — took up 69 percent, they showed.