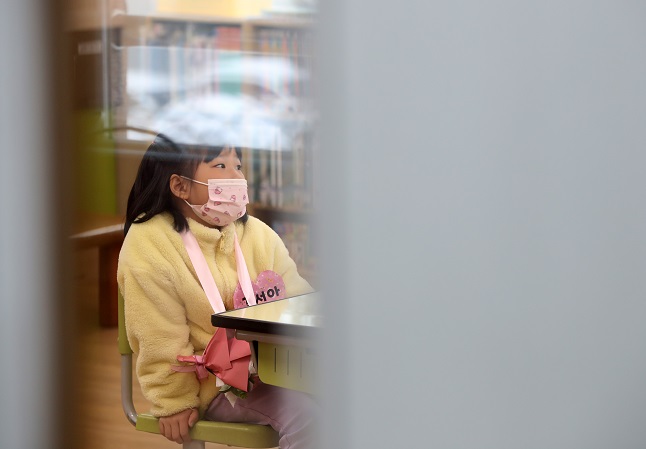 Kim Seo-ah, a 7-year-old girl, is the only newcomer of the Anheung Elementary School this year. (Yonhap)

He was to greet Kim Seo-ah, a 7-year-old girl who came holding her grandmother’s hand to begin her first day as the newest member of the school.

The school’s entrance ceremony that day was dedicated to only one student, Kim, the only newcomer this year.

Kim’s homeroom teacher put a necklace made of flowers around Kim’s shoulders, congratulating her on her first day as a first grader. They brought cakes and lit candles to welcome her.

Behind all the smiles and laughter, school employees are beginning to worry. As of this year, the school accommodates 45 students, 13 of whom are in sixth grade and soon to graduate.

This isn’t just a problem for Anheung Elementary School, but for most schools in the Gangwon countryside.

“When snow came, children would play on the sports field, shouting and laughing. Now, it has become a rare sight to see,” the school’s principal said.

Another 16 elementary schools in the province had no new students to hold ceremonies for, while 22 schools had only one new student, holding a ceremony just for them.

The Gangwon Provincial Office of Education has suggested that the number of students at elementary, middle, and high schools in the province, which stood at 151,118 students last year, will drop to 140,810 students by 2025.