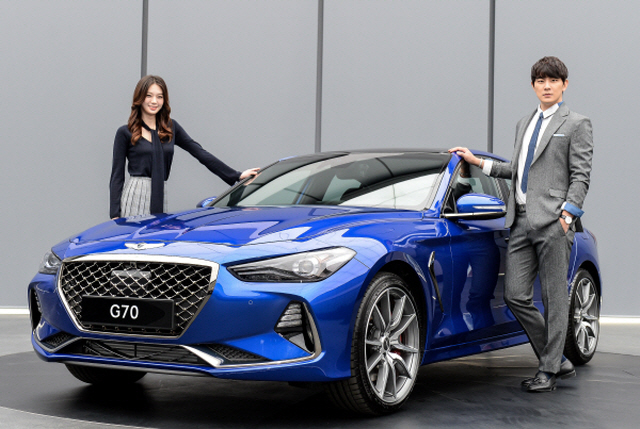 The G70 is the latest model in the luxury lineup and slots in under the larger G80 and G90 executive sedans, the South Korean automaker said.

“We launched the G70 to complete the Genesis sedan lineup and meet growing customer needs in the market,” said Yang Woong-cheol, vice chairman of Hyundai Motor in charge of research and development, in a press briefing at the carmaker’s Namyang R&D Center, southwest of Seoul. “We will focus our investment and R&D efforts on adding various SUVs and eco-friendly models to the Genesis lineup in the next two to three years.”

The G70 sedan comes in three versions, giving a choice of a 2.0 gasoline turbo engine, a 2.2 diesel engine or the top-of-the-line 3.3 petrol twin-turbo.

The 3.3 turbo can do zero to 100 kph in 4.7 seconds, faster than Kia’s Stinger sports car, which was released earlier in the year and can hit the same speed in 4.9 seconds.

The three models are all equipped with nine air bags, a host of advanced driver-assistance systems and other cutting-edge safety features.

With its advanced sensor system, the G70 can detect a bicycle in front of it and automatically bring the vehicle to a halt if the driver fails to brake.

Hyundai said it plans to launch the Genesis 2.2 diesel model in Europe this year and the gasoline-powered versions in the U.S. market in 2018.

The carmaker has previously said it aims to strengthen the Genesis brand by introducing a fully revamped G80 sedan and a luxury SUV based on the GV80 SUV concept, which it unveiled at the Geneva Motor Show earlier this year.

Manfred Fitzgerald, who is in charge of leading the Genesis brand, said the new lineup with a dynamic body and elegant interior design shows the fledging sub-brand’s efforts to adapt to the changing customer needs in the luxury segment.

“We are the new kid on the block, so we have enough room for improvement in each and every area,” said the former director of brand and design at Lamborghini. “I was challenged, but what is not a challenge?”

While the Stinger, the new sports car launched by Hyundai’s sister company Kia earlier this year, may share the same platform and components in some areas, he said it’s up to customers on which brand they choose.

“As a corporation, it is normal and economical in a sense to share the platform and components,” he said. “It’s all about how do you bring that across to the customers so that they don’t feel they are driving the same car.”