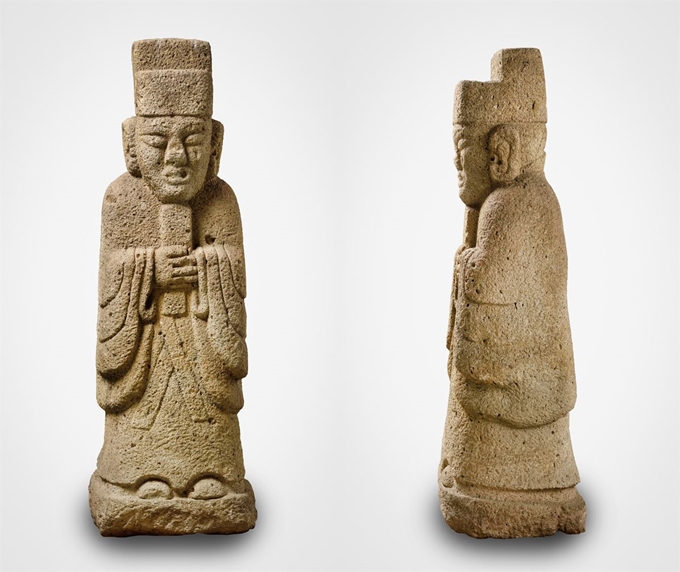 A pair of Joseon Dynasty statues of civil officials that will be returned from Germany to South Korea in March. (image: OKCHF)

SEOUL, Feb. 21 (Korea Bizwire) — A pair of Joseon Dynasty (1392-1910) stone statues, which were illegally taken from Seoul to Germany about half a century ago, will be returned to South Korea next month, officials said Thursday.

The Overseas Korean Cultural Heritage Foundation (OKCHF) said two stone statues of civil officials, also known in Korean as Muninseok, will be sent back to Seoul in March after being kept by the Rothenbaum World Cultural Museum and its predecessor, the Museum of Ethnology, in Hamburg, Germany for 46 years.

The similarly shaped stone statues are estimated to be produced in the late 16th or early 17th century. They were reportedly shipped to the European country after a German national bought them from an antique shop in Seoul’s Insadong district in 1983. The German museum bought them in 1987.

Despite similar motions and attires, the two statues are slightly different in size and expression. One measures 131 centimeters in height, 40 cm in width and 32 cm in length, while the other measures 123 cm, 37 cm and 37 cm, respectively. Their facial expressions are also distinctly different.

The Rothenbaum museum said the origins of the two statues are dubious during the Korean National Research Institute of Cultural Heritage’s on-site survey of Korean cultural assets owned by the German museum from 2014 to 2016.

The OKCHF took over the matter from the institute and sent a request for repatriation of the two statues to Germany in March last year.

The German museum then notified the OKCHF last November of its decision to return the statues, after learning that they were hidden in a moving container bound for Germany in the 1980s.

The statues will be transferred to the National Folk Museum of Korea in Seoul in April.