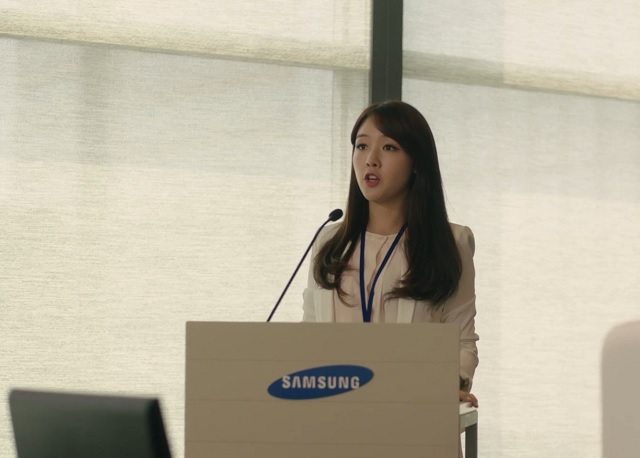 As her role is a Samsung worker, the drama shows an unknown reality of Samsung’s work environment such as offices in Seoul and Suwon and other Samsung facilities elsewhere. (image: Youtube capture)

In the web drama sponsored and produced by the Korean electronics giant, Minah acting as Mi-rae (meaning “future” in Korean) who was recently hired by Samsung challenges to be a regional expert by taking Samsung’s employee training program.

As her role is a Samsung worker, the drama shows an unknown reality of Samsung’s work environment such as offices in Seoul and Suwon and other Samsung facilities elsewhere. Also, “real” Samsung workers played cameo roles in the drama.

The drama tells the story of Mi-rae and Choigo, a young aspiring singer with a part-time job. Choigo means the “best” in Korean. The title of the drama comes from the names of the two main characters. The two of them meet by chance and start to share the same house making a variety of stories telling the reality of the Korean young generation.

The drama was Samsung’s second such sponsorship work following last year’s “Infinite Power.” An official at Samsung said, “By showing the stories of two young main characters challenging for the future and growing together, we wanted to share the dream and future of the young generation. Through the web-drama, we hope to convey Samsung’s message cheering for their challenge and passion of the young people.”