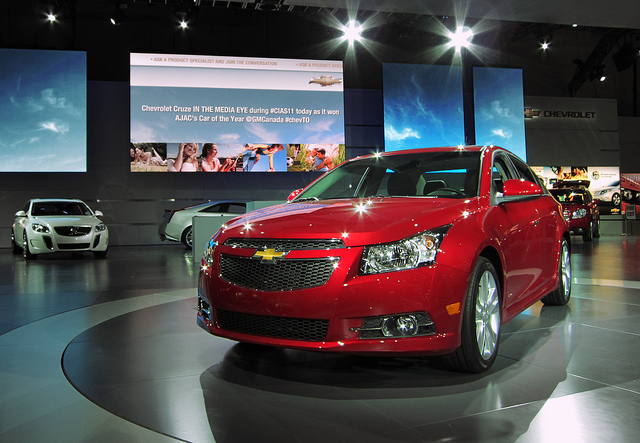 According to the decision, the mileage of Chevrolet Cruze 1.8-liter model is lowered from 12.4 kilometers per liter (kmpl) to 11.3 kmpl. Its hatchback model is downgraded from 12.4 kmpl to 11.1 kmpl. (image: atzerok/flickr)

SEOUL, Nov. 4 (Korea Bizwire) – GM Korea voluntarily altered the standard mileage of the Chevrolet Cruze and Lacetti Premier 1.8-liter gasoline models and decided to compensate for the error with cash to their owners.

On November 3, the South Korean unit of General Motors said in a statement that it decided to downgrade the fuel economy for the 1.8-liter Cruze sedan (including Lacetti Premier) produced from 2010 to 2014 based on its own recent test.

According to the decision, the mileage of Chevrolet Cruze 1.8-liter model is lowered from 12.4 kilometers per liter (kmpl) to 11.3 kmpl. Its hatchback model is downgraded from 12.4 kmpl to 11.1 kmpl.

Meanwhile, GM Korea will make monetary compensation for the error in the mileage up to 431,000 won (US$401.50) for the owners of the vehicles. Compensation amount is based on an assumption that a car owner will operate the car for up to five years and the distance traveled by each year of 14,527 kilometers, which is the national average for the model. Extra money will be given to reflect the inconvenience caused.

Meanwhile, the changes to fuel economy will not affect Cruze vehicles sold abroad since they are all certified based on standards outlined by individual countries.