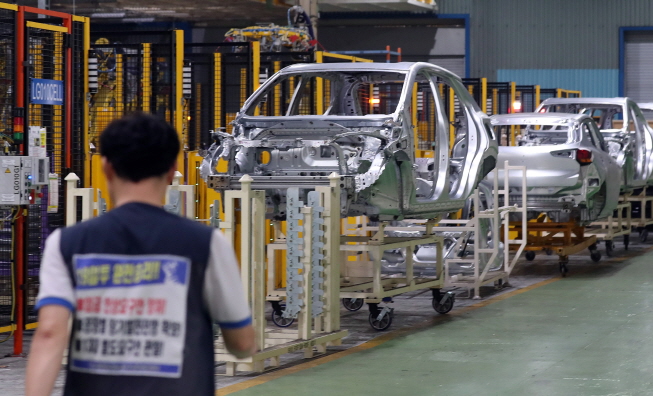 As the current leadership at the union ends its term this year, the company expects to resume talks with the new leadership early next year. (Yonhap)

Members of the GM Korea labor union announced that they decided to notify management to abort all negotiations on Thursday.

The negotiations over a new collective agreement, which have continued since July 9, ended to no avail.

The dispute between the union and management of the South Korean unit of General Motors Co. (GM) is expected to continue following the union’s announcement to shut down all negotiations.

As the current leadership at the union ends its term this year, the company expects to resume talks with the new leadership early next year.

At the 10th bargaining session, GM Korea management told the labor union that it will be difficult to offer increased wages and larger bonuses, but instead proposed an alternative that offers an additional discount between 1 million and 3 million won (US$840-$2,500) to all members of the labor union purchasing a new car from GM Korea.

The labor union rejected the deal, saying it falls short of meeting their requirements. The union has been calling for higher wages, larger bonuses, and a larger production quota for South Korea.

Union members have been holding a series of partial and full strikes since August 20, following the announcement that talks with management had failed.

The union has temporarily put a stop to all strikes following a statement by GM Korea President and CEO Kaher Kazem that he was discussing the matter with GM.