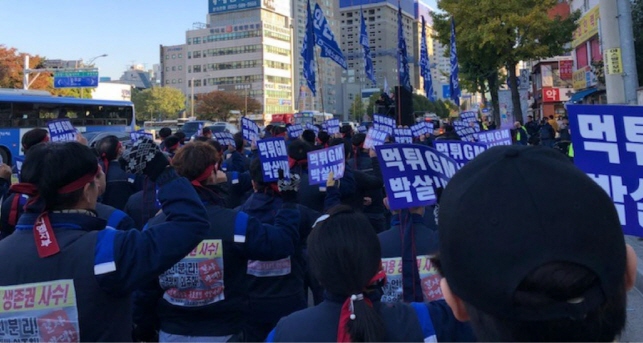 KDB asked GM Korea to fully explain the purpose of its decision to create a separate R&D company and the union has said it will go on strike if the R&D plan is not scrapped. (image: Korean Metal Workers’ Union)

SEOUL, Nov. 12 (Korea Bizwire) — GM Korea Co., the South Korean unit of General Motors Co., on Monday refused to meet with its union to narrow their differences over its decision to build a separate research and development (R&D) company, which the workers see as an initial move by the carmaker to scale down its plants in Korea.

In a statement released earlier in the day, the union said it will join the trilateral meeting between GM Korea, worker representatives and the Korea Development Bank (KDB) on Tuesday if the company provides the details of the rescue package for the loss-making carmaker signed in May between its parent company and the KDB, the second-biggest shareholder in GM Korea.

The union’s statement comes after the KDB proposed the three-party committee discuss GM Korea’s “unilateral” move to establish a separate R&D company by November and push forward the self-rescue measures for the carmaker.

Instead of accepting the idea of holding a three-party meeting that included the 10,234-member union, GM Korea proposed a bilateral meeting with the KDB to first discuss how they might narrow the differences between them and collaborate more effectively to secure GM Korea’s long-term success and sustainable future in Korea.

“We are of the respectful view that a three-party committee would unnecessarily complicate and slow down constructive dialogue,” GM Korea said in a text message sent to reporters.

Last month, GM Korea approved the plan to spin off its research and engineering divisions into an R&D corporation despite opposition. The KDB asked GM Korea to fully explain the purpose of its decision to create a separate R&D company and the union has said it will go on strike if the R&D plan is not scrapped.

But any breakthrough is unlikely between GM and the two other parties over the R&D separation issue given GM Chief Executive Mary Barra’s latest comments.

In a reply to the union last month, Barra said, “A dedicated engineering services company will benefit from focused management, increased transparency on costs and improved operational efficiency that will make it more attractive for GM to allocate future engineering work to Korea.”

The demerger is an important step to allow both the engineering services company and the manufacturing unit to stand on their own as profitable and viable businesses, she said.

In May, GM and the KDB signed an agreement to permit a combined 7.7 trillion-won (US$6.7 billion) lifeline — 6.9 trillion won from GM and 810 billion won from the KDB — to keep the money-losing Korean unit afloat.

In the same month, GM shut down one of its four car assembly plants in Korea due to a low utilization rate of 20 percent.

GM Korea has suffered weakening sales. Its sales fell 13 percent to 413,199 vehicles in the January-October period from 476,601 a year earlier.

In the 2014-2017 period, GM Korea posted 3.134 trillion won in accumulated net losses due to a lack of new models and weaker demand.