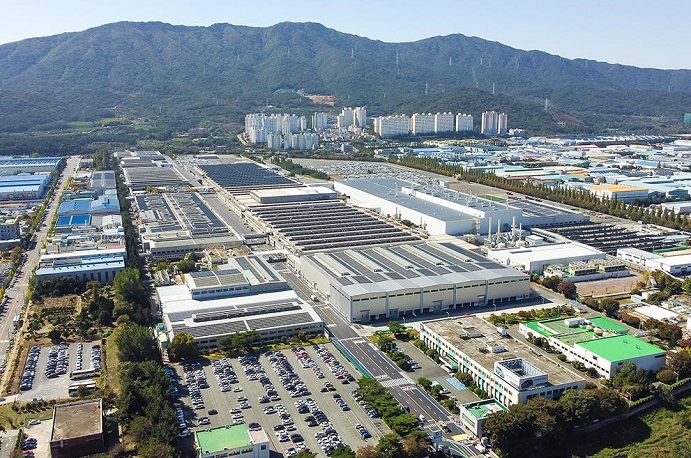 CHANGWON, Oct. 19 (Korea Bizwire) — General Motors Co. said Wednesday it is targeting to transform its South Korean operations into a “profitable and sustainable business” next year by increasing exports of next-generation vehicles.

To help achieve a turnaround, GM Korea plans to produce a next-generation crossover utility vehicle (CUV) model in its Changwon plant, about 300 kilometers south of Seoul, and expand the production of the next-generation Trailblazer SUV in its Bupyeong plant, just west of Seoul, next year.

The company plans to begin the production of the new CUV in Changwon in the first quarter.

“The success of the next-generation global new car is of paramount importance for the sustainable growth of GM’s operations in Korea,” Shilpan Amin, GM’s senior vice president and president of GM’s overseas division, said in a statement.

Korea is playing a significant role in the vehicles sold by GM around the world. Together with other GM development hubs, the Korea team is working on 20 global products, including electric vehicles (EVs), Amin said.

“On the manufacturing side, the next-generation global crossover to be assembled at Changwon will soon become a huge commercial success for GM,” he said.

In recent years, GM has invested 1.1 trillion won (US$770 million) in the two Korean plants to make them into a “world class manufacturing base” for the Detroit carmaker, the statement said.

GM Korea said it will focus on exporting the Trailblazer SUV and the new crossover model to boost sales. It will also release 10 EVs by 2025 but does not have an immediate plan to produce EVs.

“GM will maximize the export volume of the Trailblazer and next-generation global vehicles produced from Korea to the global market with its annual production capacity of 500,000 units starting from 2023,” GM Korea and CEO Roberto Rempel said.

He went on to say GM will strengthen the domestic sales with an expanded portfolio based on its multi-brand strategy. 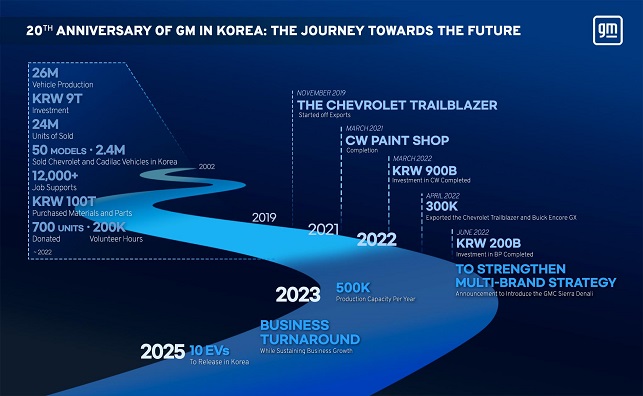 This image shows GM’s investments and achievements in its South Korean operations in the past 20 years and its future business strategy in Asia’s fourth-biggest economy.

Its lineup is composed of four locally assembled models — the Spark mini car, the Malibu sedan, and the Trailblazer and Trax SUVs — and five imported ones — the Colorado pickup, the Bolt all-electric car, and the Equinox, Traverse and Tahoe SUVs.

Most of the models currently sold in South Korea are from the Chevrolet brand. The Cadillac brand models are available here as well.

GM Korea plans to launch the GMC brand within this year, with the Sierra Denali set to be released as the brand’s launch model in the Korean market.

GM has invested more than 9 trillion won in Korea since its local operations’ foundation in 2002 and has since produced about 26 million vehicles here. Some 24 million units have been exported to over 140 countries.