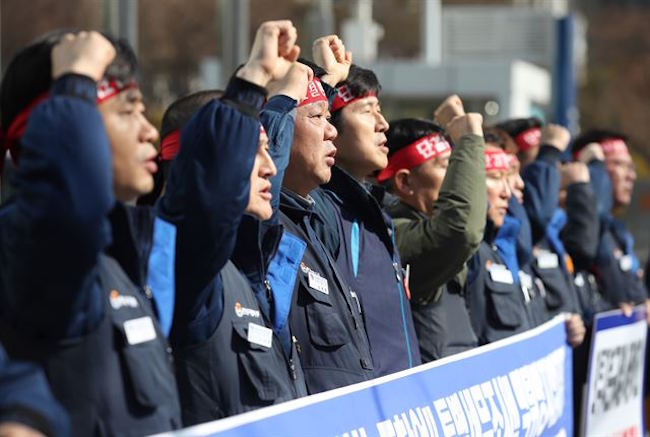 SEOUL, March 15 (Korea Bizwire) — Unionized workers at GM Korea Co. said Thursday they can accept the wage freeze and no bonuses demanded by the carmaker’s parent firm General Motors Co. in joint efforts to turn the loss-making Korean unit around.

But the union’s proposals are on the condition that GM cancels its unilateral plan to shut a plant in Korea, outlines its concrete roadmap on the allocation of new vehicles and provides a specific plan on its capital injection into GM Korea, the union said in a statement.

“GM Korea workers have made the biggest concessions at the request of (GM). It is the company’s turn to listen to our demands,” a union spokesman said by phone after a meeting to discuss this year’s wages.

GM Korea’s 13,000-member union asked the Detroit carmaker to convert the outstanding debt worth US$2.7 billion it extended to its Korean unit into equity and present a detailed plan to allocate new vehicles to its South Korean plants. The union also demanded job security for all GM Korea workers for the next 10 years.

The union’s response comes after GM’s announcement that it will shut one of its four car assembly plants in the country by May, although it claimed it can inject fresh capital into its Korean unit if the union accepts a wage freeze and no bonuses along with the suspension of certain work benefits. The auto giant already said it can convert into equity all of the outstanding debt and fund its portion of a planned $2.8 billion investment in products and facilities.

The Detroit carmaker has, moreover, been pressing the state-run Korea Development Bank, the second-biggest shareholder in GM Korea with a stake of 17 percent, to extend a financial helping hand to put the Korean unit back on track.

On Wednesday, the KDB said it could provide short-term loans to GM Korea to help stay afloat during the ongoing due diligence being carried out on the carmaker.

In a meeting with reporters Thursday, KDB Chairman and Chief Executive Lee Dong-gull said the KDB may invest new money in GM Korea if GM’s future plans in its Korean unit are viable and sustainable.

PricewaterhouseCoopers began its due diligence process on GM’s Korean unit on behalf of the KDB, with an aim to complete the review by the end of April. GM said it would face a cash crisis during the first quarter if no new funding comes from GM Korea shareholders.

Meanwhile, in a development related to the latest demand by the union on the Gunsan plant issue, industry sources have said the company and its union may not reach an agreement in ongoing wage talks.