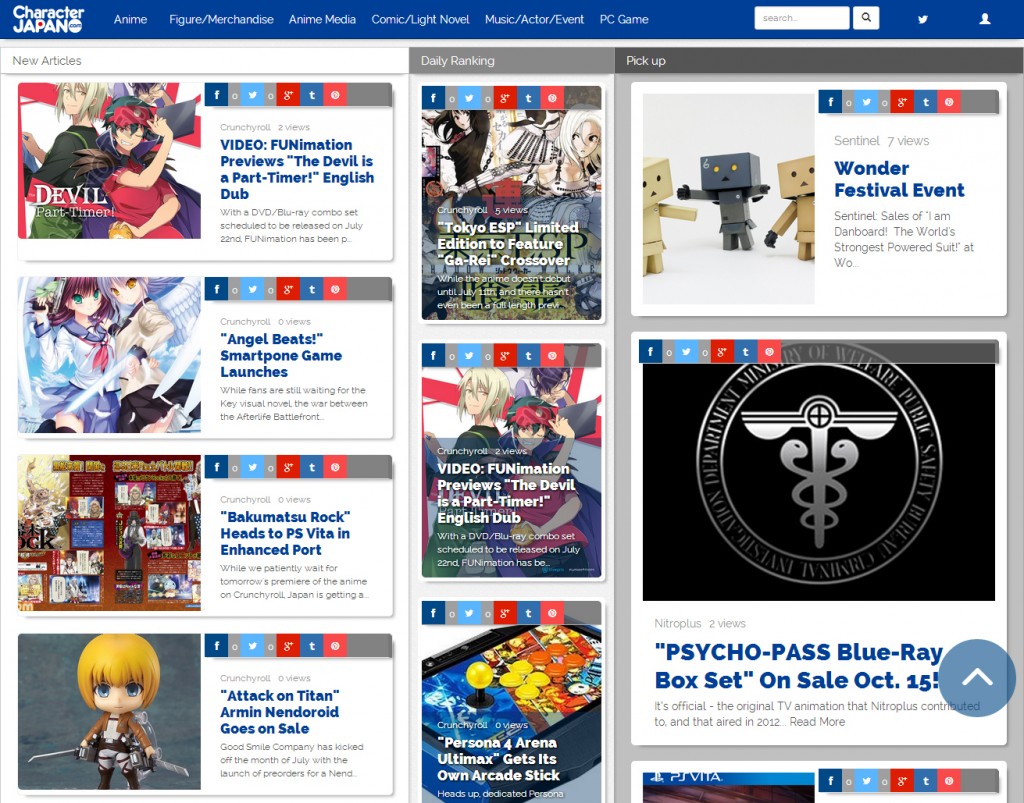 Made in Japan! Anime, manga, figures, and more? (image: BusinessWire)

TOKYO, July 2, 2014 (Korea Bizwire)–GOODSMILE Logistics & Solutions (GSLS) is launching “CharacterJAPAN,” a  free online news service that gathers all the latest official  information from Japanese animation studios, publishers, and other  popular media industries all in one place for English speaking readers.

With more and more countries outside of Japan gaining access to Japanese  animation, knowledge of Japanese popular media as well as the demand for  more content are also on the rise. However, up until now there has been  no way for fans overseas to quickly and effectively access official  information directly from sources in Japan, as it is generally published  in Japanese for domestic audiences, and spread across several platforms.

In order to fill this gap and allow fans all over the world quick and  easy access to current, official information regarding anime, manga,  figures, music, games, voice actors, events, and more, GSLS has created  the special English online news service, “CharacterJAPAN.”

Visitors will have up to the minute access to all the latest news,  including new titles, current releases, and upcoming projects and  products, directly from content providers themselves – with over 70  different names in the industry participating, such as Bandai Visual,  Gonzo, flying DOG, Nitroplus, Kaiyodo, Max Factory, Good Smile Company,  COSPA, Newtype, KING RECORDS, and more. Articles will be released in  English almost in tandem with their Japanese counterparts, leaving no  information lagging or left out.

The top page of CharacterJAPAN lists the newest articles, but articles  are also organized by specific content category. They can be filtered by  content provider, and can also be organically searched to allow visitors  to target the information that they’re looking for with ease. Not only  will users have the opportunity to read up on all the latest news, they  can also share articles with friends through a wide variety of social  media platforms? such as Facebook, Twitter, Google+, Tumblr, and  Pinterest.

With the launch of CharacterJAPAN, GSLS hopes to help fans of Japanese  media all over the world enjoy current and official information in  English, as released directly from the source. For more information,  please visit http://characterjapan.com  or contact our liaison.