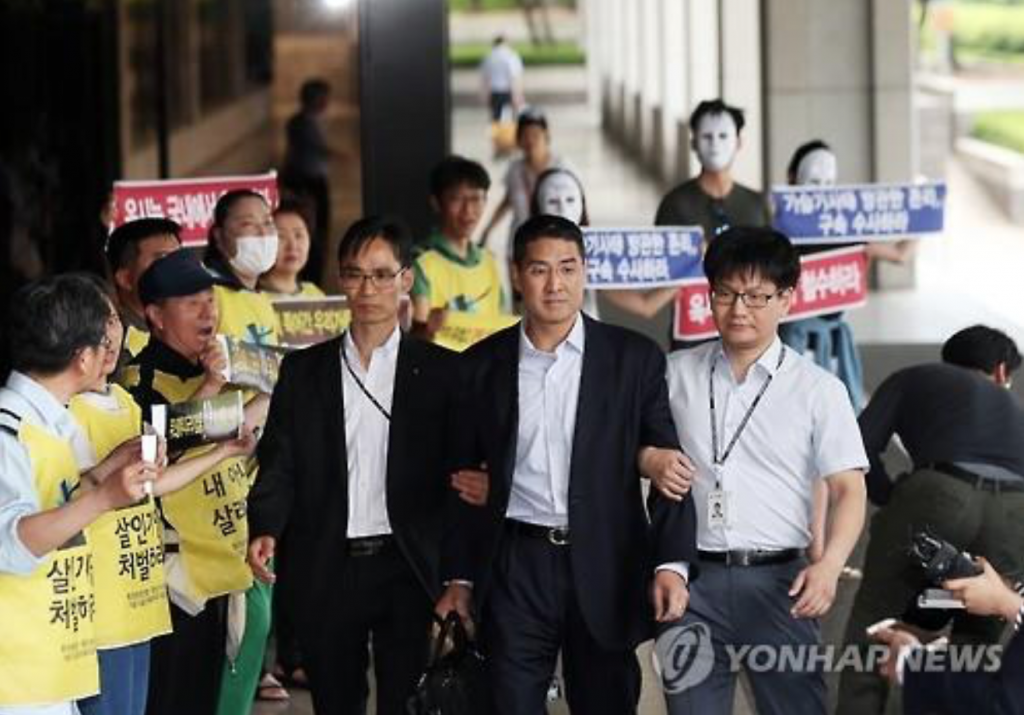 John Lee (C), former CEO of the South Korean unit of Oxy Reckitt Benckiser, appears at the Seoul Central District Prosecutors’ Office in southern Seoul on May 23, 2016, to face questioning over the British firm’s toxic humidifier sterilizer that has allegedly resulted in scores of deaths and illnesses here since 2011. Prosecutors said on July 14 that they have indicted the Korean American. (image: Yonhap)

SEOUL, July 14 (Korea Bizwire) – The CEO of Google Korea who formerly headed the local unit of Oxy Reckitt Benckiser has been indicted over the British firm’s toxic humidifier sterilizers which resulted in numerous deaths and illnesses here, prosecutors said Thursday.

John Lee has been accused of playing a part in the deaths of 73 people and lung damage to another 108 victims, according to the Seoul Central District Prosecutors’ Office. He headed the consumer goods company from 2005 to 2010 when sales of the problematic sterilizer peaked.

The Korean-American is also accused of fraud and violating the Act on Fair Labeling and Advertising.

Prosecutors suspect that Lee produced and sold the products without having them undergo proper health checks. He also allegedly ignored reports from the company’s researcher that the sterilizer should not be advertised as “safe for children” and went ahead with the phrase.

Prosecutors had earlier sought a warrant to formally arrest Lee, but the Seoul Central District Court dismissed the request, saying there is not enough reason or necessity to detain the suspect.

Seoul prosecutors said they have been interrogating related government officials since last week to see if they are responsible for failing to stop the consumer goods maker’s wrongdoings in advance.