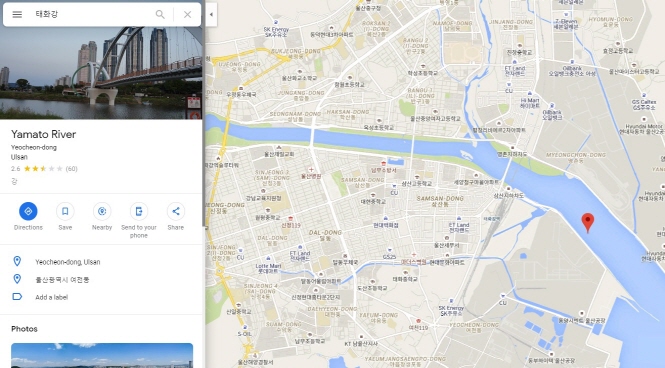 Search results for ‘Taehwa River’ on Google currently show that the English name for the river is ‘Yamato River,’ which is actually the Japanese pronunciation of the river. (image: Korea Bizwire)

ULSAN, Mar. 22 (Korea Bizwire) — The Taehwa River, a famous tourist spot that runs through the city of Ulsan, has been displayed as ‘Yamato River’ on Google Maps, and hasn’t been revised for the last two months despite a number of requests.

The city of Ulsan has sent a formal request to Google to correct the name, but any revision has yet to be made.

Search results for ‘Taehwa River’ on Google currently show that the English name for the river is ‘Yamato River,’ which is actually the Japanese pronunciation of the river.

Ulsan found the error on January 23, immediately after which the city asked Google Korea to correct the wrong name. Two months have passed since, and the name has not yet been fixed.

Ulsan requested that the name be corrected to Taehwagang River.

“We sent out an official letter to Google Korea to correct the name of the river two months ago, but they did not make any changes,” said an Ulsan city official.

“If we can’t make this work by phone, we will visit Google Korea office in Seoul to directly ask them to correct the name.”

Yamato is a Japanese term referring to the state of Japan or a name of a city located in the central region of Japan.

Some assume that Google mistranslated the Chinese character for the name ‘Taehwa,’ which looks similar to the Japanese term, ‘Yamato’.

South Korean netizens have been pressuring Google to correct the name, pointing out that “the Taehwa River is in the South Korean city of Ulsan, not in Japan.”