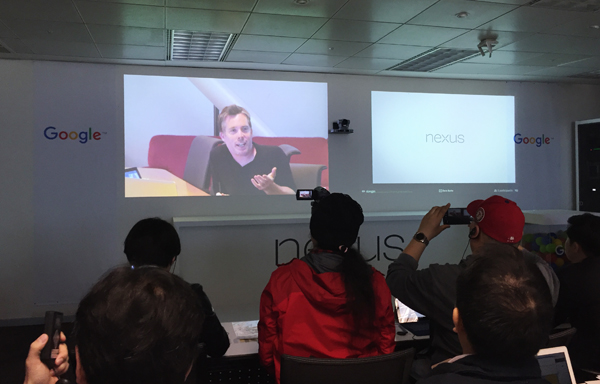 David Burke, Android engineering director at Google, speaks before the local press via video conference at a media launch event for the Nexus 5X and 6P held at the Seoul Google Inc. office on Oct. 13, 2015. (image: Google Korea)

The Nexus 5X and Nexus 6P, each manufactured by South Korea’s LG Electronics Inc. and Huawei Technologies Co. of China, were showcased at a media event held by the local unit of the U.S. tech giant at its Seoul office.

Launched in the U.S. late last month, the two handsets are the first Nexus phones that support Google’s latest operating system, Android 6.0 Marshmallow, and a fingerprint scanner for user authentication.

“We wanted to show the Android in the context of a premium experience. (The new Nexus phones) allow us to show how a smartphone should be,” Dave Burke, Android engineering director, told reporters via video conference.

Burke declined to provide details about the plan for a global launch of the much talked about Android Pay, Google’s mobile payment tool.

“We’re working very hard to expand it internationally, but we don’t have a date for that yet.” 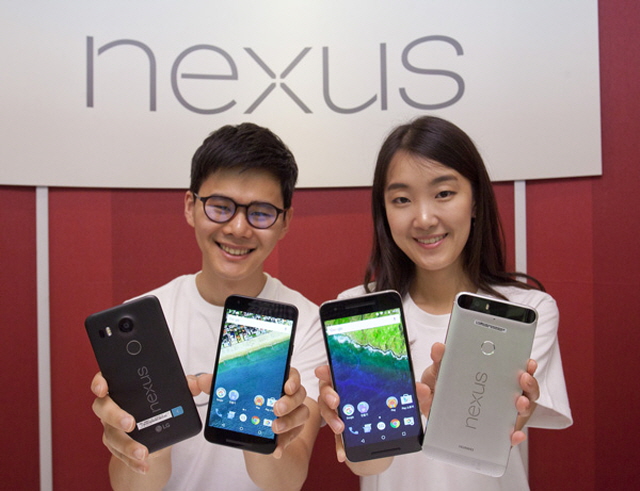 Since 2010, the Google Nexus has been manufactured in joint partnerships with electronic device makers around the world, as a benchmark phone or tablet to test its Android operating system in the event of an upgrade.

Samsung Electronics Co. and LG Electronics both have taken part in the collaboration, so far having each developed at least two Nexus phones.

The two new Nexus phones come with an enhanced camera that allows far better quality for indoor photography. Its sensor, designed to collect more light, works to give less motion blur and a clearer image of the subject, Burke explained.

The fingerprint sensor is placed on the back of the body — different from the iPhone’s home button — on the exact position where the user’s index finger would naturally touch the phone, allowing easier access to the phone, according to Google.

Nexus 5X boasts compactness and practicality in a simple plastic casing. Weighing 130 grams, which Google claims falls in the super light category, the 5.2-inch smartphone is equipped with two premium-level cameras: 5-megapixel on the front and 12-megapixel in the back.

It comes with a 2,700mAh battery that has a 20 percent larger capacity than the preceding Nexus 5, LG’s second collaboration with Google in 2013.

Nexus 5X is due to hit shelves at local stores starting next Tuesday. South Korean mobile carriers said earlier that they have begun to receive preorders for the LG Nexus through their online shops.

Huawei’s Nexus 6P is designed to target the high-end market. It is Google’s first phone with a full aluminum metal-body, made to show off a sleek look with smoother edges that gives users a better grip.

Google did not yet give the date for the Nexus 6P’s local launch, adding that it will “come in a few weeks.” Only the 32GB will be shipped to Korea for now, at a price of 670,000 won, it said.