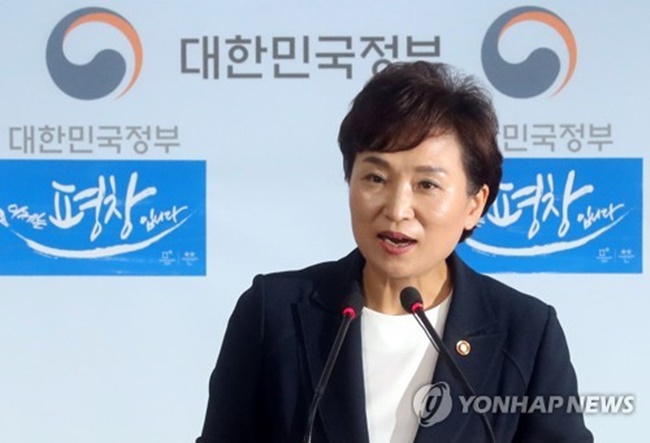 In this photo taken on Aug. 2, 2017, Land Minister Kim Hyun-mee announces a set of measures to curb an overheated real estate market during a press conference held at the government complex in central Seoul. (Image: Yonhap)

The Moon Jae-in government announced its first real estate measures in June a month after taking office to strengthen lending rules that can help deal with speculators and keep household loans from rising further.

But home prices have since continued to rise mainly in Seoul, home to roughly 20 percent of South Korea’s population.

In the latest steps, the government has designated all 25 districts in Seoul and two cities — the administrative city of Sejong, some 130 kilometers southeast of Seoul, and Gwacheon city just south of the capital — as “overheated speculative districts.”

In particular, 11 districts in Seoul and Sejong City have been designated “speculative districts” subject to far tougher taxes, financial regulations and state scrutiny, the finance and transport ministry said in a joint statement.

“The government won’t tolerate any speculative forces that purchase homes, not because they want to live in them, but to sell them at a profit,” Land Minister Kim Hyun-mee said in a press conference.

The government has also adopted stricter rules which require multiple-home owners to pay higher capital gains taxes when they sell their houses. The owners of two houses or more currently pay 6-40 percent of their capital gains taxes from the sale of their homes. Under the new rules, they are obliged to pay up to 20 percent additional taxes on top of existing taxes, the statement said.

The rules also restrict the resell of purchase rights of new apartments, which have been cited as a major speculative practice aggravating problems facing regular households, it said.

The new LTV ratio is revised down from 40-70 percent, with the new DTI ratio unchanged at 40 percent. The LTV and DTI ratios for multiple-home owners have been set at 30 percent making it that much harder to borrow money to engage in property speculation.

“Multiple-home owners have benefited from a cut of 10-30 percent in capital gains taxes, depending on if they own a house for more than three years and sell it. But they are ruled out from the tax cuts under new regulations,” a ministry official said.

Experts viewed the government’s real estate policies as tougher than expected and they should help stabilize the market to some degree. 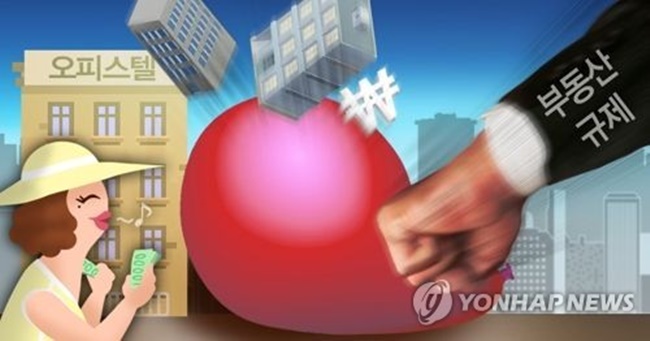 Her view was echoed by Park Won-gab, senior advisor for real estate at KB Kookmin Bank, who pointed out some potential fallout.

“Possible side effects, drastic regulations and possible rate hikes may freeze the overall real estate markets,” Park warned. Such a development can hurt the construction sector as a whole that played a part in pushing up growth.

In other measures, the government will provide a total of 850,000 houses, or 170,000 per year, for the next five years for underprivileged people under a cheap, long-term contract, the ministry said.

To meet this goal, it plans to develop greenbelt areas and make better use of public buildings and idle state-owned land, it said.

The home supply ratio in Seoul and the metropolitan areas is expected to exceed 100 percent at the end of this year, with the ratio for the capital city alone to reach 98 percent, it said.

In the party-government consultation meeting held early in the day, Land Minister Kim said the comprehensive policy package is designed to curb short-term speculative demand and regulate the market to the benefit of those who actually need houses.

She called for the party’s cooperation in passing the related bills through parliament.

The government will consider taking further steps to tackle speculation in the property market if home prices continue to rise despite the latest measures, Finance Minister Kim Dong-yeon said in the same meeting.

South Korea’s household debt stood at 1,360 trillion won (US$1.209 trillion) at the end of the first quarter, up from 1,343 trillion won a quarter earlier and from 1,224 trillion won a year earlier, according to the Bank of Korea.